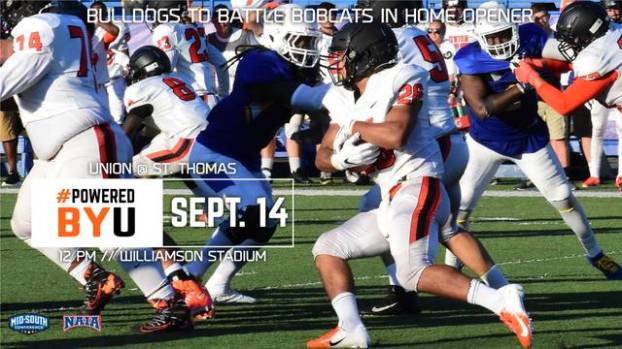 The Union College football team makes it way back to Williamson Stadium to host St. Thomas University (Fla.) for its home opener on Saturday.

BARBOURVILLE, Ky. — The Union College football team makes its way back to Williamson Stadium to host St. Thomas University (Fla.) for its home opener on Saturday.

Both teams are seeking their first win of the season as Union is 0-2 and St. Thomas is 0-1.

This is the first-ever meeting on the gridiron between the NAIA institutions. The Bobcats are in their inaugural season as a varsity program.

Robert Armes leads the Bobcats in rushing with 93 yards, and Jordan Sepulveda is the team’s top passer with 181 yards and one touchdown on 26-of-35 passing.

The Bulldogs have thrown for 446 yards this season and three touchdowns. Ear Wells is the team’s top receiver with nine catches for 209 yards and two scores.

Defensively, Jay Brown and Cohen Perry lead the way with 18 and 17 tackles, respectively.

Gators and Wildcats hook up in SEC Showdown