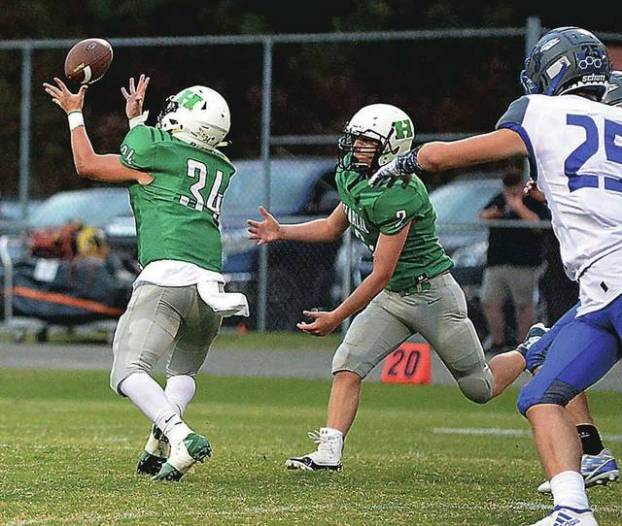 Harlan running back Ethan Clem recovered an errant snap during last week’s game against Phelps. The Green Dragons will be looking for their first win of the season on Friday when they travel to Middlesboro.

Coming into the 2019 season, the Middlesboro Yellow Jackets and Harlan Green Dragons were struggling programs with new coaches.

The basketball standout is playing football for the first time as a senior and has transformed the Middlesboro offense with his speed and athleticism, rushing for 338 yards and all seven of the Jackets’ touchdowns so far on the ground.

“Jabari has been making some plays for us. He has helped us offensively,” said Middlesboro’s Larry French, one of the state’s most successful coaches in a 50-year career. “We’ve gotten some other kids out they haven’t had out in the past. They are starting to get some football knowledge and helping us on the field.”

“They try to get the ball in his hands. They play him at quarterback. They play him at receiver. They play him in the slot,” Harlan coach Eric Perry said. “He’s definitely a weapon. He’s the fastest kid we’ll see. They also have some good kids up front. They will have the best line we’ve seen so far.

“That’s the key, trying to contain (Kyle). We also need to sustain some drives. We just didn’t have the ball the other night. We just had 32-33 plays. We have to get our defense off the field and get it in our playmakers’ hands.”

French said the Jackets have been fortunate thus far with a 34-32 win over Garrard County and a 28-27 overtime victory last week over Lynn Camp. Middlesboro fell 55-28 to Williamsburg two weeks ago.

“We’ve been lucky. We’ve won two ballgames by a total of three points,” French said. “We’ve made some plays we needed to make to win games. We’re trying to get better each and every week. I think we’ve gotten better, but we have a long way to go.”

Harlan is 0-3 with a forfeit loss to Harlan County followed by losses to Berea and Phelps.

“We played about as bad we can play, and that’s how we practiced all week,” Perry said of the loss last Friday to Phelps. “We have some kids who constantly think they’re hurt, so we have to put a halt to that,” Perry said. “We’re still raw with kids who have never played. We didn’t start playing until the third quarter against Phelps and that hurt us. There were some good signs with some kids stepping up like Tayquan Vick on defense. I thought Jon Eldridge made some big plays in the passing game, and so did Juan (Bynum).”

Junior quarterback Connor Scearse returned to the lineup midway through last week’s game and played well in the second-half comeback. Several other Dragons have also been injured of late, including tight end Jordan Howard, center Wil McCarthy and running back Tristan Cochran, and are considered questionable for this week’s game.

“I think they play awfully hard,” French said of the Dragons. “I’ve got to see them on film and got to watch them in the gridorama. They’ve improved quite a bit and are playing extremely hard right now.”