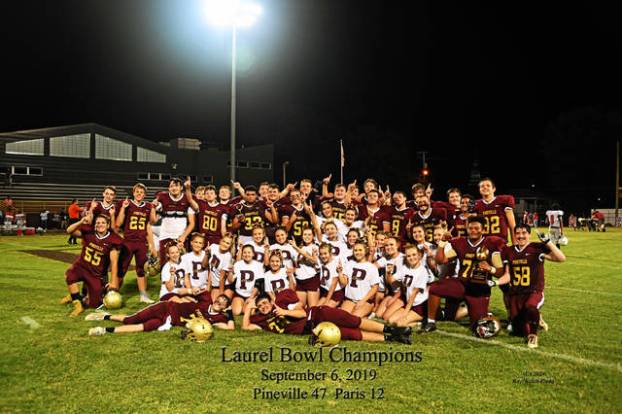 The Pineville Mountain Lions controlled the game from start to finish after taking the opening kickoff back for a touchdown in their 47-14 victory over the Paris Greyhounds in the Laurel Bowl in Pineville Friday night. With the victory, the Mountain Lions improved to 3-0 for the first time since 2010.

“We started off a lot faster in this game,” said Pineville coach Randy Frazier. “That’s something we’ve been waiting to see for a few games now. We have been playing some pretty good defense and have been doing a good job at limiting our opponents offensively. We’ve been waiting to put a full game together on both sides of the ball, and I think we finally did that in this game.

“We really dictated the pace from start to finish. Scooby took the opening kickoff back for a touchdown, and that really helped us set the tone. We scored on defense in this game as well, which is something we had been looking for all year up to this point. The team is doing a great job of acclimating to this system in the first year, and they’re playing well as a team. I’m very proud of them. We are going to celebrate this win and get back to work tomorrow.”

Pineville (3-0) will host East Ridge (0-2) on Friday in an attempt to extend their winning streak to four games.

Special to the Daily News This past Saturday, the Bell County cross country team competed at the Southern Harrier Classic... read more