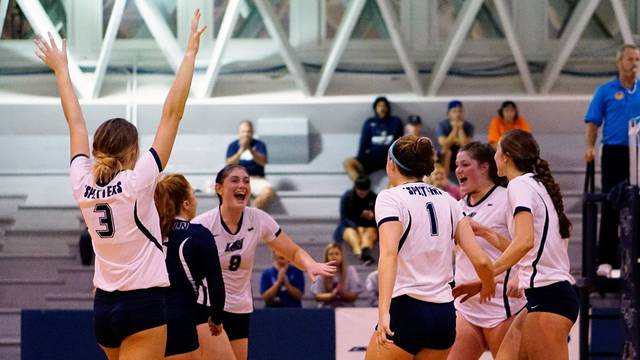 The LMU volleyball team has been picked in a tie with Carson-Newman to finish third in the SAC preseason poll.

ROCK HILL, S.C. — The South Atlantic Conference announced its 2019 Volleyball Preseason Coaches’ Poll Friday morning and the Lady Railsplitters of Lincoln Memorial University have been picked in a tie with Carson-Newman to finish third in the 12-team league.

Anderson was chosen second in the preseason predicted order of finish with two first-place nods and 121 points. The Lady Railsplitters finished ahead of Queens (90) in fifth, followed by Lenoir-Rhyne (87) sixth, Mars Hill (67) seventh, Tusculum and Catawba (51) tied for eighth, Coker (49) 10th, Newberry (46) 11th and UVa-Wise (23), who rounded out the preseason poll in 12th.

A native of Grand Rapids, Michigan (Northview HS), Storms returns for her senior campaign after capturing All-SAC Second Team accolades a season ago. Finishing the year with 311 kills (2.88/set), which ranked fifth in the league, the 6-foot hitter was named 2018 American Volleyball Coaches Association (AVCA) Division II Southeast All-Region honorable mention and collected SAC All-Tournament Team plaudits. Tallying 25 service aces to go along with her team-leading kills, Storms will begin the fall as LMU’s returning blocks leader after making 80 total in 2018. She also contributed 203 digs (1.88/set) a season ago and has racked up 544 kills (2.55/set) across the last two seasons of play after transferring to Harrogate from Grand Rapids Community College.

On Oct. 15, 2018, Storms was heralded as SAC AstroTurf Volleyball Player of the Week after leading the Lady Railsplitters to a 3-0 week. She made 35 kills on only nine errors in a trio of matches, while posting six assists, 28 digs and eight total blocks in wins over Carson-Newman, Queens and Catawba.

Walter, a native of Buford, Georgia (Mill Creek HS), began her collegiate career on a high note, serving as LMU’s primary setter in 2018. With a team-best 989 assists (9.16/set) during her freshman campaign, the 5-foot-8 setter ranked fourth in the conference in assists and fifth in assists per set en route to grabbing SAC All-Freshman Team honors. Hitting at a clip of .256 offensively, Walter’s 27 service aces were the fourth-most of any Lady Railsplitter as her 337 digs (3.12/set) were the second-most on the team.

As head coach Jenny Michael begins her ninth season guiding the Lady Railsplitters, she looks to lead LMU back to the NCAA Tournament for a second-straight season after the Blue and Gray earned an at-large bid in 2018. It would mark the first time since 2011-12 the Lady Railsplitters earn back-to-back trips to the NCAA Tournament. In her eight seasons coaching LMU, coach Michael has won 151 matches and reached the 100 mark in SAC victories last season with a 3-0 sweep of Carson-Newman (Oct. 30).

One of four LMU teams to make it to NCAA postseason play in 2018-19, the Lady Railsplitters went 20-10 overall in 2018 and finished third in the then 11-team conference with a 14-6 league mark. The fourth 20-win season in Michael’s tenure in Harrogate last fall, LMU will have a chance to post 20 victories in consecutive seasons for the first time in seven years in 2019.

The Lady Railsplitters will have a solid mix of youth and experience this fall as LMU returns just five letter winners from a year ago, including three starters, but welcomes 13 newcomers. With the help of assistant coach Todd Raasch, the Lady Railsplitters were able to sign their largest signing class in program history. LMU’s 2019 roster features five transfers, three of which came from Division I programs, and eight true freshmen. In addition to Storms and Walter, the Lady Railsplitters bring back starting senior outside hitter Lindsey Nartker, junior defensive specialist Sarah Jones and senior setter Abby Higgins. Returning redshirt freshman defensive specialist Caitlin Bethell will look to make an impact for LMU this fall, while senior outside hitter Kaylee Stone will assist the team from the sidelines.

Prior to their third-place league finish in 2018, the Lady Railsplitters were picked fifth in last year’s SAC preseason coaches’ poll.

LMU opens the 2019 season by hosting USC Aiken, Emmanuel and King in tournament play Friday and Saturday, Sept. 6-7 inside Mary Mars Gymnasium in Harrogate. SAC play will begin for the Lady Railsplitters Friday, Sept. 13 with a home match versus Tusculum.