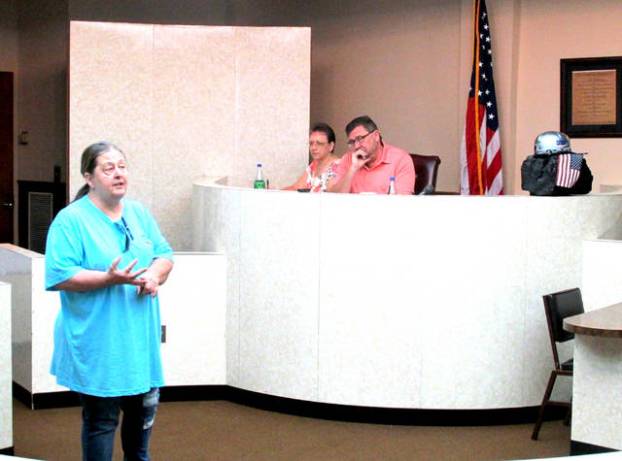 Resident Angela Jackson appears before Bell County Fiscal Court on Tuesday proposing the consideration of a needle exchange program to be brought to Bell County.

During Tuesday’s Bell County Fiscal Court meeting, it was proposed and approved that the 2019 tax rate remains exactly where it is with no change. The fiscal court chose not to approve the compensating tax rate, which would have generated $37,000 but also increased taxes.

Bell County Resident Angela Jackson brought the discussion of a needle exchange program before the fiscal court during Tuesday’s meeting.

She explained that for over a year now, the Saving Bell group has been working on bringing the needle exchange program to Bell County among other projects, and Middlesboro Mayor Rick Nelson has agreed to sponsor the program.

“It would not be over here,” Jackson said. “But, we would have that van to go into the county for not just the needle exchange program but for other necessities. It would be the under control of the health department.”

Jackson reiterated to the court that the needle exchange program is needed.

“When the people come in for the needles they have to give the needles back, and you get to know those people and they get help,” she said.

Brock responded to Jackson and her request for the county getting on board.

“I will say this about needle exchange and my thoughts on it have evolved since it was first brought up,” Brock explained. “At first, it was if they are going to do needle exchange at the health department nobody that’s associated with the health department, including myself is for that because while these folks need our help, there are some that are seeking assistance to get away from drug addiction, others are not.”

Brock explained that while some are looking to get off of the drugs, others are only looking to steal because of their addiction.

“I do have sympathy for them, but at the same time as it applies to us protecting the public safety,” Brock said.

Judge Brock explained that he is sympathetic with those who want to break the chain that holds them to drugs, but he is leery toward those who have no desire to break those chains.

“They’ll take the free needle, but they’ll also steal a purse from the car if the car is not locked up,” he said. “There has to be a certain amount of balance that has to be applied.”

He explained that the mobile aspect of it and it not being at a fixed location makes it a somewhat questionable.

“Without knowing where they are going to congregate to do this, for example, if the exchange were going to be somewhere around the courthouse square at 1 p.m. or 4 p.m., I would be vehemently opposed to that,” he said. “There are too many people walking the streets. The schools let out and there are kids walking every street. I think we would be doing those kids a disservice to put them in an environment with someone who quite frankly is under the influence of drugs or could be a sexual predator.”

He said he wants to protect them from stepping on a needle but protecting them from the environment is equally important.

“Needles are a problem, and we are very aware that there needs to be something done,” he concluded. “The counseling piece makes it somewhat palpable but until we know where that van is going to be, that is my sticking point.”

He explained that he can support it if he knows that it is going to be at a location that wants it and in a controlled environment on a regular basis.

“That’s a decision that they make,” he said. “If it’s on a public street and the public exposed to the potential risk of someone wanted and being actively sought, I’m going to be against it.”

“Wait a minute, ARH has agreed to have a needle exchange inside their building?” Brock questioned her.

“That’s what I understand from Theresa,” Jackson responded.

“That’s new information,” Brock said as Jackson asked if a meeting could be set up between them all.

Jackson thanked them all for allowing her to be there and speaking on behalf of the needle exchange program.

“I appreciate your time, and the next meeting for the Saving Bell is at the Middlesboro Health Department and it is the first Friday of September,” she said.

The next meeting of the Bell County Fiscal Court will be held Sept. 10 at 11 a.m. in the old Bell County Courthouse.