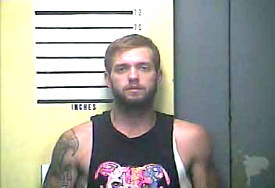 A Harlan County man is behind bars after allegedly breaking into a home near Ford’s Woods Thursday morning. Stephen Dozier, 26, of Baxter, was charged with first-degree burglary after being apprehended by officers with the Middlesboro Police Department.

According to the press release, officers responded to a 911 call about a home invasion at a residence near the Ford’s Woods area. The homeowner reported that an unknown male had broken into the residence armed with a handgun, and he was still inside the residence.

As officers Joel Quillen and Nick Capps forced entry into the rear of the residence to confront the male, the suspect (identified as Dozier) tried to flee out of the front of the home — where he was met by Sgt. Josh Burchett, K-9 officer Harvey Johnson and K-9 Atlas.

The release states Dozier was arrested without further incident. His vehicle was located approximately two blocks away from the residence. He was lodged in the Bell County Detention Center with other charges pending.