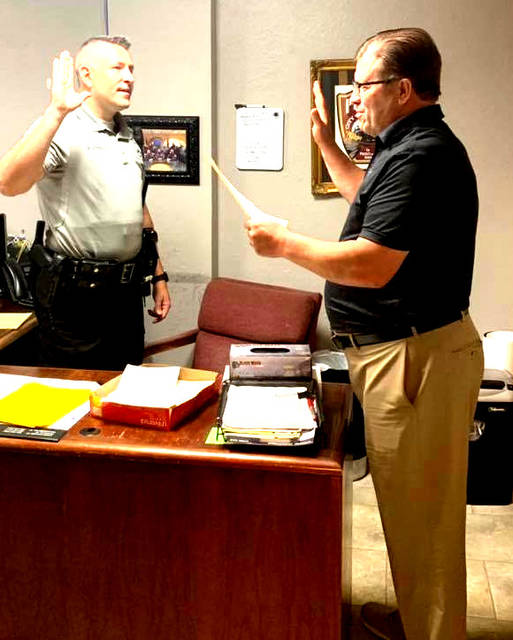 Officer Shane Stewart is sworn into the Pineville Police Department by Mayor Scott Madon on June 17.

Puzzle completed for Stewart in return to Pineville Police Department

“To get the opportunity to come back kind of completed the puzzle for me,” Stewart said as he sat in the Pineville Police Department Wednesday. “I started my law enforcement career fresh out of high school. It’s a blessing to get to come back, my heart was always here.”

Stewart’s career began in dispatch at 911 before being hired by the Bell County Sheriff’s Office when he turned 21.

“I went to the academy at Richmond with the Sheriff’s Office,” he explained. “In 2005, I first came over to the Pineville Police Department and I spent about three and a half years here and was then promoted to sergeant at one point. I decided I wanted to go back to the Sheriff’s Office.”

It was four and a half years ago when the election rolled around and Stewart was not retained by the Sheriff’s Office following the newly elected sheriff taking over.

“I had to start doing some other things and was actually unemployed for about six months,” he said. “My first job back in the work force was loss prevention and chasing shoplifters at Belk (in) Middlesboro.”

He explained that it was a little different to go from policing a whole county to policing a department store.

“I was good at it, and it was a good place to work. They paid me well, took care of me, but you know you go from being a countywide police officer for years and then you are stuck inside of a store,” he said. “I wasn’t happy there.”

He worked there about six months before he started working with Coca-Cola in Middlesboro.

“I worked with Coca Cola for two years,” explained Stewart. “It’s a great company and they are absolutely awesome, but my heart wasn’t in it and it wasn’t really what I wanted to do. When you start doing something as soon as you’re an adult, it’s burned into you.”

He worked for Coke for about two years and then a job at the Judicial Center came open.

“It was the Court Designated Worker,” he said. “It’s not really law enforcement, its juvenile justice, but it was back in the door for me. It was an opportunity to get back into my retirement system. Getting back into that position gave me the opportunity to get back into the court system working with the attorneys and the judges and the guys that I knew. It was a little more familiar and a little easier for me to transition into that.”

Stewart worked that position for about two years when the phone rang with an opportunity that allowed him to come back to the Pineville Police Department.

“Kyle (Dunn) and Mayor (Scott) Madon had made contact with me and gave me the chance to come back, and I took it immediately,” he explained. “I knew that in the back of my mind if I was ever going to come back to law enforcement that it would be here, just because I felt I was best suited for (the job). I was just glad and happy to get the opportunity.”

Stewart said one of the hardest experiences along the way was transitioning to a job out of law enforcement.

“It was tough to do this for as long as I did it, and then all of the sudden you’re not a part of it anymore,” he said. “It was hard. You want to blame a lot of different people and make up a lot of different reasons of why you are not there, ultimately, you are where the good Lord places you and you just have to accept that. That’s the hardest thing.”

He said it was hard to accept that God had closed a door, but he wanted another door to open immediately but waiting on His time was the hardest. Stewart said once he accepted that, he was OK.

Stewart said his biggest regret in his law enforcement was the day that he left the Pineville Police Department the first time.

“It’s a blessing to get to come back. My heart was always here,” he reiterated. “I’ve played sports here at Pineville, I went to high school here, I grew up in this town. I grew up with these people.”

When asked what his ultimate goal is when he starts his day, it is to help.

“When you get into law enforcement, you kind of think you are Superman and you think you can save the world and do everything,” he said. “Over time, you get older, you get wiser and realize that you can’t save the world or change the world, but if you can impact one person along the way and do it the right way and shine a little bit of God’s light on people in the process, what more could you ask for.”

Stewart expressed that if you need any assistance in the City of Pineville to please contact the Pineville Police Department at 606-337-2207.

At the end of the work day on Monday, Dr. George Day completed a major accomplishment. He completed his 60th... read more