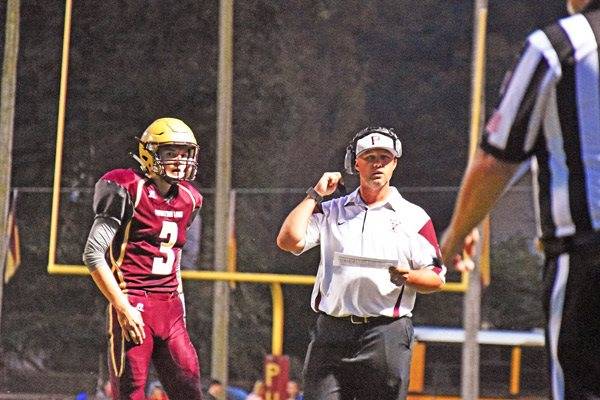 Former Pineville head coach Bart Elam talks to a referee during a regular season game. Elam will be taking on a new journey as offensive coordinator for the Union Bulldogs this upcoming season.

Elam embarks on a new journey at Union College

In about six weeks, the Pineville Mountain Lions will snap on their helmets in preparation for their first game of the season. Things will be a little different this year. After 13 years on the sidelines, Bart Elam will not be at the helm. Instead, Elam will be taking on a new journey as the offensive coordinator of the Union Bulldogs.

“It was so hard (to leave Pineville),” said the former head coach of the Mountain Lions. “There are so many emotions tied to so many things when you’re there 13 years. You make so many friendships. I had kids that I was coaching, and their kids were just starting to come up through the youth leagues and things in Pineville.

“That made me feel really old, but that also makes you realize how long you’ve been there. In 13 years, I’ve seen preschoolers become seniors and graduate. I was there a long time, and Pineville was good to me. I will always support what they do and the values that small schools instill in kids.”

Elam said one thing that he is proud of was his, along with the coaches that worked alongside him, ability to bring Pineville football back to a reputable level. In the three years before he took over as head coach (2003-2005, according to KHSAA), the Lions went a combined 6-24.

In the five years before Elam’s ultimate departure, Pineville tallied a combined record of 24-29. That time frame also included a 7-3 regular season campaign in 2015 that saw the Lions defeat the likes of Middlesboro, Lynn Camp and Harlan before being eliminated in the first round of the playoffs by Hazard.

Now that his time is over in Pineville, Elam is ready to take on a new task — helping rebuild the Union Bulldogs. The former head coach said the new challenge has breathed new life in him as it pertains to his coaching career.

“It’s so nice to be able to truly get down and coach football again. When you’re a head coach there are so many other things logistically that you have to take care of on a daily basis, especially at the high school level. Where I’m coaching at right now, coaching is the only thing on the priority list.

“For me, I always, even after being a head coach for so long, thought of myself as an offensive coordinator. That’s where my passion is and always has been. Here at Union, I’m able to do that.”

One thing that will be familiar for Elam during his first season as offensive coordinator with Union is the fact that the Bulldogs are rebuilding. Last season, the team went 2-8 while winning one game in the Appalachian Athletic Conference. Those two victories came against Cincinnati Christian and AAC opponent Point University.

“As a coach, that’s a great thing because you always like to leave places better than you found it,” said the new offensive coordinator. “That’s what our goal is this year with the Bulldog offense. We’re going to be multiple. We’re going to throw it around a little bit. (We’re going to) be in a lot of spread concepts. We have several really good explosive, young athletes coming back on the offensive side of the football.”

Elam won’t be the lone District 7 coach to be at Union next year. He was able to grab former Harlan head coach John Luttrell to coach the offensive line.

“He’s kind of taking this journey with me,” said the former head coach. “We’ve always been good friends. It’s a really good relationship.”

With one last look on his time in Pineville, Elam believes the outlook for the Mountain Lions is bright. During his last season with Pineville, the team shocked several after opening the season with a 4-1 record that included victories over Leslie County and Middlesboro.

“That group that everyone said may win one game, they won four, and we really gave a couple away,” said Elam. “They’re going to be a good little group. I’m excited to see how they fare, but I know they’re going to be a physical group. I look for big things from them.

“I think Randy (Frazier) is going to do a great job there. He’s a tough, hard-nosed coach, which is what those Pineville kids like. They are used to being held accountable. They’re used to working hard, and he is going to work them hard.”

Union College opens the season Aug. 29 at Division I Morehead State. Pineville will hit the road for the first game of the Frazier era with a trip to McCreary Central.

The Pineville-Bell 11-12 All-Stars faced off against Middlesboro in the District 4 tournament in Corbin on Wednesday. Pineville-Bell walked away... read more