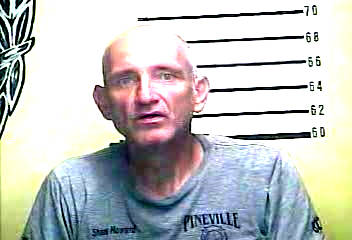 A Virginia man stole a firefighter’s t-shirt to conceal his identity and is facing several charges of theft. Jerry Robinson, 49, of Galax, Va. remains in the Bell County Detention Center with no bond.

Robinson was caught on two occasions with bicycles that didn’t belong to him. The first incident occurred in Pineville and the second in Middlesboro.

After the attempt of theft of the bicycle in Pineville, Robinson was seen on camera inside Long’s Pic Pac grocery attempting to steal 18 packs of steaks from the business. He was chased from the store and the steaks were retrieved.

Officer Hollingsworth detained Robinson and took him to the Bell County Detention Center. Shortly after his release, Robinson attempted the same type of bicycle theft in Middlesboro.

Middlesboro Police Officer Michael Bradley spotted Robinson fleeing from the scene, where he had been allegedly trying to remove items from a Glennwood Park Road home.

Robinson refused to stop for Bradley, but the officer was assisted by Middlesboro Police Chief Tom Busic and officer Robin Venable. He was apprehended on the corner of 14th Street and Cumberland Avenue. He continued to resist arrest but was restrained and then taken to the Bell County Detention Center.

There is no bond listed on any of Robinson’s charges.

Puzzle completed for Stewart in return to Pineville Police Department

On June 17, the Pineville Police Department welcomed back former officer Shane Stewart. “To get the opportunity to come back... read more