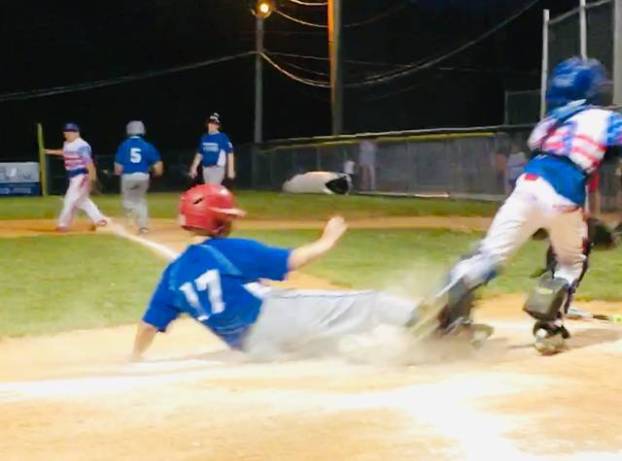 Joseph Brigman slides into home during their match up against Harlan in the little league all-star district tournament.

Pineville-Bell 11-12s down Harlan in Corbin

The Pineville-Bell 11-12 All-Stars were in Corbin Tuesday night to take on Harlan in the opening round of the all-star district tournament. Pineville-Bell topped Harlan, 6-2, in six innings.

A great pitching performance by Joseph Brigman and closing efforts by Elijah Hampton proved to be too much for Harlan as Brigman recorded nine strikeouts while only allowing two runs (both unearned) and Hampton recorded three straight outs to finish the game.

Both teams struggled to find offense through the first two innings of the game. Both teams were pitching and fielding well and were unable to take the advantage over one another.

In the bottom of the third, Harlan was able to tally their only two runs of the game when Chase Brown and Nate Montenaro were able to steal home on fielding errors by Pineville-Bell’s catcher.

The two unearned runs that Harlan was able to tally in the third inning would be their first and last of the game. Pineville-Bell began to find their offensive rhythm in the top of the fourth, their most productive inning of the game.

Pineville-Bell was able to quickly notch two runs in the top of the fourth when Hampton and Reece Arno were able to cross home on errors by the Harlan catcher, tying the game at 2-2.

Luke Widner added another run to the scoreboard as he drove in Brigman on an RBI single, giving Pineville-Bell the lead for the rest of the game.

Widner was able to cross home plate on an unearned run after the Harlan catcher was unable to corral an errant pitch. Chase Widner added Pineville-Bell’s fifth run of the inning by crossing home on another error by Harlan, bringing the score to 5-2.

Barring an error by Pineville-Bell that allowed Harlan’s Jackson Luttrell to take first, the Pineville-Bell pitching held Harlan off base throughout the entire fourth inning.

The Bell County Bobcats are set to resume football practice on Wednesday at 6 p.m. after the dead period ends... read more