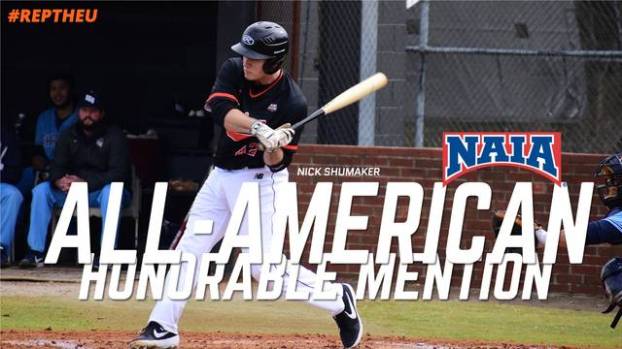 Shumaker was one of five Appalachian Athletic Conference (AAC) recipients to receive this honor while being the first Bulldog since 2011 to be named an All-American. He is the 24th player in program history to receive this award.

During his senior year, the third baseman led the AAC with a batting average of .437, going 83-for-190 in 50 games. Shumaker ranks ninth in the NAIA with his batting average, along with being ranked sixth in hits per game (1.660), and 25th with total hits (85).

Shumaker tied Union’s RBI for the year with 53, hitting six home runs, 17 doubles, and a triple with a .632 slugging percentage to finish out his career. He compiled consecutive hits in 18 consecutive games for the longest hitting streak by a Bulldog this year.

Union finished the season 27-25 overall and advanced to the Appalachian Athletic Conference (AAC) Tournament championship game. The Bulldogs qualified for the NAIA National Championship Opening Round, going 1-2 in the national tournament.