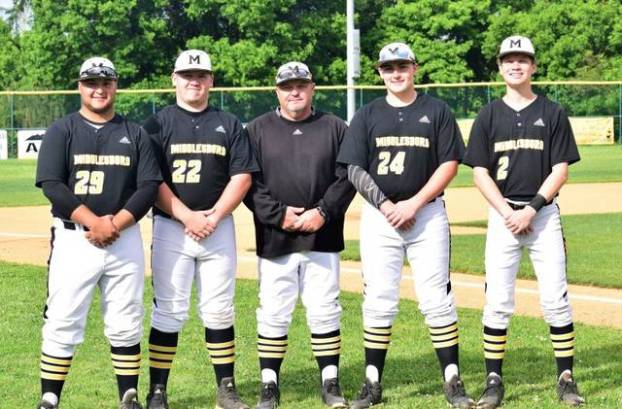 Two of the best teams from the 13th Region were on display Monday when the Whitley County Colonels came to town to take on the Middlesboro Yellow Jackets.

Prior to Monday’s game, Middlesboro was on a six-game winning streak capped off by a regular-season sweep of in-county rival Bell County on the road in their last game.

Whitley County defeated Middlesboro 8-2 on Monday, moving the Colonels into the top spot in the 13th Region ahead of the regional tournament, to be played at LMU. Monday was also Senior Night for the Yellow Jacket.

Seniors Chris Callihan, Hagen Owens, Lane Perry and Jeremiah Wilder were all recognized for their time with the Yellow Jackets baseball team.

“These four young men will be greatly missed,” said Middlesboro coach John Smith. “Two of them have been a part of our program for three years and the other two for four years. They have meant a lot to this team and to our school. All four of them are outstanding young men, great teammates and students. The coaching staff wish them nothing but the best and know they will be successful in anything they choose to do.”

Both teams struggled to find runs in the second inning as both failed to tally any runs in the inning.

After retiring the Yellow Jackets in the bottom of the second, the Colonels played their best inning of the game in the third, adding four runs to the scoreboard and extending their lead to 6-0 despite four errors in the half-inning.

Middlesboro was finally able to add two runs in the bottom of the fifth, their only runs of the game, bringing the score to 6-2 in favor of the Colonels.

Middlesboro failed to hold of the Whitley County offense throughout the duration of the game, while struggling on the sticks themselves. Whitley County added two more runs in the sixth inning to secure and six-run victory over the Yellow Jackets.

With the loss, Middlesboro moved to 13-10 on the season and into seventh place in the 13th Region. With the victory, Whitley County moved to 21-8 on the season.

Whitley County took on the Harlan Green Dragons Tuesday in Harlan. The Yellow Jackets were slated to play the Clay County Tigers on Tuesday.