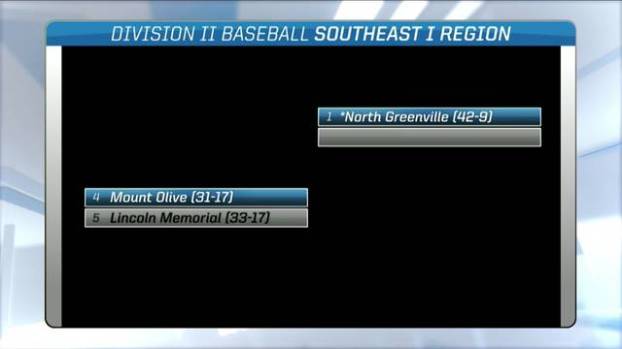 INDIANAPOLIS, Ind. — The long and nerve-wracking wait is over for the Lincoln Memorial University baseball team as the Railsplitters earned an at-large bid to the 2019 NCAA Division II Baseball Championship on Sunday night. Lincoln Memorial has been tabbed as the No. 5 seed for the Southeast Regional and will open NCAA tournament play against No. 4 seed Mount Olive on Thursday.

The Railsplitters (33-17) are heading to the NCAA tournament for the third consecutive season and for the fourth time in program history, though this marks the first at-large selection for Lincoln Memorial, who previously played its way into the NCAA tournament by winning the South Atlantic Conference Championship in 2013, 2017 and 2018.

Both sides of the Southeast Region brackets will play double-elimination tournaments May 16-18, with the respective winners meeting up after that in best-of-three super regionals May 24-25 to determine who advances to the championship finals June 1-8 at the USA Baseball National Training Complex in Cary, N.C.

The Railsplitters will square off against Mount Olive for the right to face North Greenville in the winner’s bracket of the Southeast Region 1 tournament. The Trojans went 31-17 this season and 15-10 in Conference Carolinas play, and were last in action on May 6 when they suffered a 5-3 loss at Francis Marion. Prior to that, Mount Olive advanced to the title game of the Conference Carolinas Championship, but was handed a 10-7 loss by North Greenville.

It’s been even longer since Lincoln Memorial last took the field, as the Railsplitters’ last appearances came on April 28 when they were knocked out of the SAC Championship with a 10-2 loss to Wingate. Since that loss, the Railsplitters have been patiently waiting to see if they would earn at at-large bid to the NCAA tournament for the first time in program history.

Lincoln Memorial and Mount Olive have one previous NCAA tournament meeting as the two teams squared off in 2013 during the Railsplitters’ first-ever appearance in the Southeast Regional. In that matchup, the Trojans came away with a 9-3 victory on their home field. That remains the only meeting between the two squads in program history.

More information regarding the NCAA tournament, including game times, links to follow and ticketing information, will be available in the coming days at www.lmurailsplitters.com.

HARROGATE, Tenn. – Unending rain, a change of scenery and a walk-off win. Those were the key plotlines in the... read more