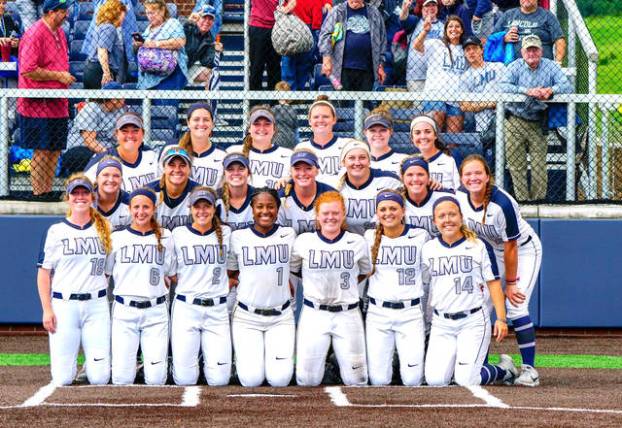 The Lady Railsplitters advanced to the 2019 NCAA Southeast Super Regional series with a 4-3 walk-off win over the Anderson Trojans on Saturday.

HARROGATE, Tenn. – Unending rain, a change of scenery and a walk-off win. Those were the key plotlines in the craziest and most memorable chapter that was written in the most memorable season in the history of the Lincoln Memorial University softball program on Saturday.

After a barrage of rain forced the Lady Railsplitters to move their Southeast Region 2 championship game from Carson-Newman to their home field on short notice, Lincoln Memorial erased a two-run deficit in the bottom of the seventh inning and advanced to the 2019 NCAA Southeast Super Regional series with a 4-3 walk-off win over the Anderson Trojans.

The Lady Railsplitters improved to 38-13 on the season to establish a new single-season record for wins and post the most wins by any LMU program ever while extending the longest postseason run in program history. Anderson saw its season end in heartbreaking fashion to finish with a 33-22 overall record.

“Words can’t describe it,” head coach Richie Richardson said following the game. “I’m just elated for the team and the girls who have worked so hard, invested so much and accomplished so much. This is probably something that they didn’t expect at the beginning of the year and I’m just happy for them right now and happy for the program.”

This season marks the first NCAA tournament appearance in program history and now the Lady Railsplitters are heading to the Super Regionals for the first time in program history. With the way everything played out on the other side of the bracket, Lincoln Memorial will host a best-of-three series against Young Harris beginning on Thursday at Dorothy Neely Field. The first to win two games will head to the World Series in Denver, Colo.

“It’s hard for me to believe. It really is,” Richardson said. “I don’t know, as confident as I am in these kids, that I thought we would be hosting a super regional here at the beginning of the season. We would never tell them that, but that’s a long, long road. A hard, tough road to get to this point. There’s only 16 teams left playing Division II softball and we are one of them.”

When the day started, it did not seem like the Lady Railsplitters would even get to play at all. Lincoln Memorial and Anderson were originally scheduled to start at 10 a.m. this morning in Jefferson City, Tenn., but with rain battering the Carson-Newman grass playing surface, the unprecedented decision was made to move the game to Harrogate. Some seven and a half hours later, the Lady Railsplitters were able to clinch the biggest win in program history in comeback fashion in front of their home crowd.

“What a crazy day it’s been,” Richardson said. “Up at the crack of dawn to try to get a ballgame in over there and then the NCAA I guess thought this was the only opportunity we had to play the games.

“So bringing the game right here to our doorstep, the players were excited. We were trying to tell them it’s not about moving the games here, it’s still about playing possessed and getting it done. We stuck with it. It looked bleak there for us, but I was happy with how they just continued to play, stuck with it and got the job done there at the end.”

The Lady Railsplitters got the game started on the right foot, taking the lead in the bottom of the second inning after McKenzie Henry led off with a single and scored three batters later on a sac fly from Audrey Petoskey.

However, Anderson answered right back in the top of the third as Joshlyn Martin led off with a double and came around to score on a two-out single from Morgan Charter.

The game remained tied at 1-1 until the top of the sixth inning, when the Trojans struck for a pair of runs. Breanna Hagerty led off the inning with a go-ahead, solo shot over the left-center field wall, while Mattie Hamilton added a two-out, infield single that scored a run later in the inning.

That two-run lead seemed insurmountable with Anderson lefty Kayla Pepper dealing a gem, but the Lady Railsplitters flipped the script in a hurry in the bottom of the seventh inning to avoid the if-necessary, winner-take-all second game in the Southeast Regional.

Allie Jones started the rally with a lead-off single, which was followed by a single from Savannah Daniel two batters later. Ty-Kella Goins then roped a double to center field to score pinch runner Bella Buccellato from second and bring the Lady Railsplitters within a run.

After that, Sierra Hucklebee dropped a bloop single down the right-field line to score Daniel and tie the game.

That brought senior Kelsie Hocutt to the plate with the winning run on third base. After working into a hitter’s count at 2-1, Hocutt delivered a frozen rope over the centerfielder’s head to drive home Goins and cap the wild come-from-behind victory.

“This is a resilient group,” Richardson said. “They never give up. When the kid hit the home run there, nobody got down on Justice. Justice Smith just pitched a fantastic ballgame. There has been the feeling with this team that we can still come back and do it. It seems like we’ve been down a number of times this year and come back and got it done. It’s just their resiliency and sort of a desire to win that we needed and got there at the end.”

Smith picked up the win for the Lady Railsplitters after a gritty complete-game performance. The junior righty allowed 11 hits but gave up only three earned runs while striking out five to move to 11-2 on the season. It was her second straight quality performance after going five strong in Friday’s win over Carson-Newman. She limited the Trojans to 4-for-13 hitting with runners in scoring position, including an 0-for-7 start in those situations.

Goins went 2-for-4 with a double, an RBI and the winning run, while Hucklebee collected a pair of hits with a double as well. Jones went 2-for-3 with two singles, while Daniel notched her second consecutive two-hit game of the NCAA tournament to pace the LMU offense, which matched Anderson with 11 hits total.

The Lady Railsplitters will be the first team in the history of the South Atlantic Conference to host a Super Regional when they welcome the Young Harris Mountain Lions to town next week. More information regarding the Super Regional will be available in the coming days at www.lmurailsplitters.com.

The Middlesboro track teams traveled to Harlan County High School on May 11 to participate in the Area 9 Championships.... read more