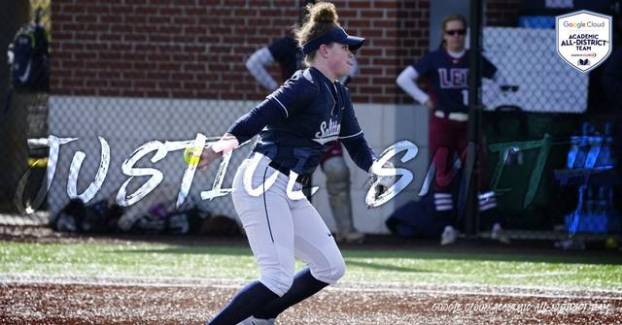 Junior pitcher Justice Smith was named to the Google Cloud Academic All-District Softball Team as she maintained an impressive 3.96 GPA behind her finance major.

HARROGATE, Tenn. — For the fifth time since 2000, a Lincoln Memorial University softball player has been named to the Google Cloud Academic All-District Softball Team, which was voted on by College of Sports Information Directors of America (CoSIDA) officials and released on Thursday.

That special player is junior pitcher Justice Smith as she maintained an impressive 3.96 GPA behind her finance major to join Brianna Mulkey (2014), Meghan LaFevor (2012), Jenny Lowe (2000) and Nicki Miller (2000) on the list of Lady Railsplitters to receive the honor.

The Academic All-District Team, which is selected by the members of CoSIDA, recognizes the nation’s top student-athletes for their combined performances on the field and in the classroom. First-, second- and third-team Academic All-America honorees will be announced in June.

Smith, who was named Female Breakthrough Athlete of the Year at the fourth annual Lincoln Awards in April, has also excelled on the field for her best season at LMU. The junior’s 3.47 ERA paced the Lady Railsplitters’ three-arm rotation as did her 10-2 record and 66 strikeouts.

The Rockmart, Ga., native tossed a total of 107.0 innings with a 1.58 whip, while allowing a team-low .299 batting average against her. Her stellar efforts in the circle have helped lead the Lady Railsplitters to their first-ever regular-season SAC championship, along with their first NCAA Regional berth as the No. 3 seed.