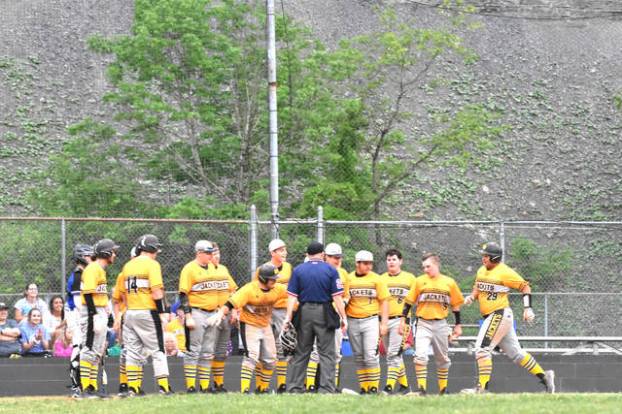 The Yellow Jackets crowd around home plate after Lane Perry hit his first career home run, a three-run shot, in their 13-5 win over Bell County on Thursday at Bell County High School.

Two days after defeating the Lynn Camp Wildcats on the road, the Middlesboro Yellow Jackets took on in-county rival Bell County on Log Mountain Thursday in a rescheduled game that was delayed due to weather.

After trailing the Bobcats 3-1 through three innings, the Yellow Jackets poured on seven runs in the fourth inning to pull away from Bell County and secure a 13-5 victory and extend their winning streak to a season-long six games.

With the victory, Middlesboro has won 11 of their last 13 games. During that span, the Yellow Jackets are averaging 10.5 runs per game, while only allowing 3.5 runs per game.

“This is a big win for us,” said Middlesboro coach John Smith. “This is our last district game of the regular season and it was against one of our rivals. We came out flat, but we had a little team meeting in the dugout and that seemed to get everyone fired up.

“We really came out and hit well in the fourth inning and helped set ourselves up to finish the game strong. Stephen (Justice) did a great job on the mound tonight. He kept Bell County off balance. Tyler (Harris) came in and did a great job of closing the game out from the mound, just like he has all year.”

“The fourth inning ended up being the difference maker,” said Bell County coach Scott Chaney. “Hayden (Clark) pitched a good game for us, they just hit the ball very well tonight. I felt like we were scared to win the game. We had every opportunity to capitalize on having a lead or getting a third out, and we just couldn’t make it happen.

“We started to get tight around the fourth inning and kept making mistakes. Errors and mental mistakes were what got us in this one. I like the way we started off and if we would have stayed at that level of intensity, I think the outcome would have been a little different.”

Middlesboro took an early lead in the top of the first when Collier Elkins stole home on an errant Bobcat throw that sailed passed the third baseman, giving the Yellow Jackets an early 1-0 lead.

Bell County answered with two runs in the bottom of the first with RBI doubles from both Antonio Zachary and Ethan Brock, giving the Bobcats a 2-1 advantage heading into the second.

The Bobcats added a run in the bottom half of the second when London Stephney stole home, giving Bell County a 3-1 lead heading into the third.

With Shawn North and Hagen Owens being walked, Elkins connected on a two-RBI single, tying the game at 3-3 in the fourth. Tyshawn Simpson then drove in Elkins on an RBI double, to give Middlesboro their first lead of the game at 4-3.

After the Simpson RBI, Bell County senior D.J. Estes took to the mound in relief of Clark.

Braden Ausmus connected on an RBI single, extending the Yellow Jacket lead to 5-3. Ausmus and Chris Callihan gave Middlesboro two more runs on errors by the Bobcats, extending their lead to 7-3.

Owens added the final RBI of the inning for the Jackets on a single to give Middlesboro a 8-3 lead heading into the bottom of the fourth.

It wasn’t until the bottom of the sixth that the Bobcats were able to add another run to the scoreboard on a stolen base by Marcus Chaney, who was pinch running for Estes, to close the gap to 8-4 in favor of Middlesboro.

Tyler Harris was brought in for the Yellow Jackets to relieve Justice after he pitched 5 2/3 innings.

Bell County added one more run during the game, while Middlesboro added five more in the top of the seventh inning.

A two-RBI single from Ausmus extended the Middlesboro lead to 10-4 before Lane Perry stepped in the box and delivered his first career home run, a three-run shot, permanently extending the Jacket lead to 13-5.

“After the fourth inning, I felt like we hit well all the way through the line-up; everyone contributed,” said Smith. “We did a great job of running the bases tonight too. I was happy to see Lane (Perry) hit his first career home run tonight. He works hard, he’s a great kid and he’s a great hitter. He’s had a few this season that were very close but had some rough luck on a few of them. I was glad to see him rip one out in this game.”

Ahead of the district tournament, to be played at Middlesboro High School, the Yellow Jackets secured a one-seed by going undefeated in regular season district play at 6-0.

With the victory, Middlesboro improved to 13-9 on the season. They faced-off against the Williamsburg Yellow Jackets on Friday at home.

With the loss, the Bobcats moved to 6-12 on the season and secured a three-seed in the district tournament. Bell County is slated to play Casey County and East Jessamine on Saturday.