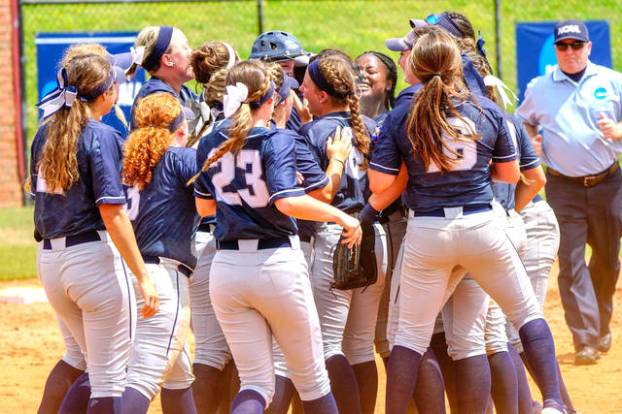 After relinquishing a five-run lead late, the Lincoln Memorial softball team responded and fought its way back to defeat Carson-Newman in extra innings, 7-5, to move one win away from a trip to the Super Regionals on Friday in Jefferson City, Tenn.

JEFFERSON CITY, Tenn. — After relinquishing a five-run lead late, the Lincoln Memorial softball team responded and fought its way back to defeat Carson-Newman in extra innings, 7-5, to move one win away from a trip to the Super Regionals on Friday in Jefferson City, Tenn.

The Lady Railsplitters (37-13) jumped all over the host Eagles early, taking advantage of numerous errors to plate three runs in the second and two more in the fourth. Justice Smith kept the dangerous Carson-Newman (29-11) bats in check over five innings, but the Eagles stormed back in the sixth, using a two-run double and a three-run bomb to tie the game.

However, Lincoln Memorial stayed the course and opportunity came knocking again in the top of the eighth inning, as the Lady Railsplitters plated two runs on another Carson-Newman error, while an obstruction call at home allowed the second run to score to extend the lead to 7-5.

Reliever Bailey Griffith found herself in trouble in the bottom of the eighth after the Eagles loaded the bases with two outs, but induced a pop out to herself to end the wild, back-and-forth game.

“They were high energy today, aggressive, all the intangibles that I think are important to have this time of the year, they came with them today,” LMU head coach Ritchie Richardson said. “We faced some adversity there late in the game when they came back to tie it. I’m just really pleased that our enthusiasm didn’t wane, our aggression didn’t wane and we were able to fight through it and come back to get a win.”

With the win, the Lady Railsplitters advance to the Southeast Region 2 final to face either Carson-Newman, Anderson or Wingate on Saturday at noon. Carson-Newman will play the winner of the Anderson / Wingate game later on Friday, and the winner of that game will then face Lincoln Memorial on Saturday. The Lady Railsplitters will need just one win to move on to the Super Regional and would need to be beaten twice by whoever they face on Saturday.

Lincoln Memorial has now strung together back-to-back NCAA tournament wins after entering the field for the first time in program history this season.

“I’m just really excited,” junior second baseman Ty-Kella Goins said. “It almost feels unreal. My class and any class above us has never experienced this, so this is all really new to all of us. It’s really, really exciting.”

It was far from easy for the Lady Railsplitters to get through Friday’s game unscathed, though Carson-Newman committed a program-record seven errors that resulted in five unearned runs.

A trio of Carson-Newman errors put the Lady Railsplitters in business in the top of the second inning. A fielding error by shortstop Leah Sohm put McKenzie Henry on base with no outs, while a fielder’s choice that resulted in no outs followed by an Allie Jones single loaded the bases for Lincoln Memorial. After an infield fly and another fielder’s choice, Goins stepped to the plate looking to deliver a two-out, run-scoring knock.

Deliver she did, dropping a single into left field to get the runners in motion. Left fielder Abby Fiessinger made an error on the play as did Sohm on the ensuing throw to allow all three runs to score and give the Lady Railsplitters a 3-0 lead.

The Lady Railsplitters added two more runs to their lead in the top of the fourth, this time in more traditional fashion as Grace Cochran led off with a single and scored three batters later on a two-out double from Savannah Daniel. Goins followed that up with another RBI single to plate Daniel and push the lead to 5-0.

That 5-0 cushion seemed like it would be more than enough for the bulk of the game with Smith dealing a gem. After issuing a one-out free pass in the second, the junior righty retired nine straight batters before the Eagles finally started to get into a rhythm at the plate.

Ashlyn Cooper singled with one out in the fifth before Sohm followed with a two-out knock to turn the lineup over. However, Smith worked out of the jam by forcing Lacie Rinus to foul out to third baseman Emma Webb.

While the Eagles could not push a run across in the fifth, they turned the game on its head in the sixth, forcing Smith’s exit from the game following back-to-back singles with nobody out. Griffith was called in to the circle and Carson-Newman kept the rally going with a single from Allison Rager to load the bases.

Following a foul out, Taylor Scott put the Eagles on the board with a two-run single down the left-field line. Immediately after that, Cooper tied the game with a three-run shot that landed in the pine trees over the left-field wall.

Cooper’s knock changed things in a hurry for the Lady Railsplitters, but they did not let that momentum swing shake their confidence.

“Stay aggressive. Keep your enthusiasm level high,” Richardson said of his message to the team after the game-tying, five-run sixth inning. “That’s how it goes. I didn’t think it was going to be easy…you can be cruising along and all of the sudden the outs are very, very difficult to get.”

That sentiment was felt by the players on the field as well.

“When they tied the game up we weren’t surprised,” Goins said. “We just knew we had some work to do.”

The Lady Railsplitters went back to work in the seventh inning as Webb legged out a leadoff single before pinch runner Bella Buccellato advanced to second on a sacrifice bunt and third on Grace Cochran’s fly out to center. Jones nearly beat out a play at first that would have put the Lady Railsplitters back in front, but was called out on the play to send it to the bottom of the seventh.

That inning, Lincoln Memorial got into a sticky situation but escaped to force extra innings. Abby Fiessinger was hit by a pitch with one out and moved to second on a sac bunt. After an intentional walk was issued to Rager, Griffith got five-hole hitter KaraLynne Levi to lineout to first to end the threat.

More craziness then issued in the top of the eighth. Audrey Petoskey got the inning started with a leadoff single, while Goins drew a walk two batters later to put runners on first and second with one out. Then, on a routine grounder from Sierra Hucklebee, C-N second baseman Valerie Seay let the ball go between her legs to allow the go-ahead run to score. In the very next at-bat, Kelsie Hocutt hit a fly ball into center that was caught. On the ensuing play at the plate as Goins tried to score, the throw was on time but catcher Levi was called for obstruction to make it a 7-5 game.

Griffith had to wiggle out of trouble again in the bottom of the eighth after two walks and a single for Sohm loaded the bases with two outs. However, Fiessinger popped out to Griffith to send the Lady Railsplitters to the finals of the Southeast Region 2 tournament.

Goins went 2-for-4 with two RBI and a walk to lead the LMU offense, while Daniel went 2-for-4 with a double, two runs scored and a stolen base. Webb produced a pair of hits as well for the Lady Railsplitters, who finished with a narrow 10-9 edge in that department.

Griffith picked up the win, improving to 16-7 on the season with her second victory of the NCAA tournament.

It has already been a record-breaking, historic season for the Lady Railsplitters and they will look to make more history on Saturday when they seek the first Super Regional bid in program history. No matter the stakes, the message will remain the same.

“Bring the same fight that we had,” Ritchie said regarding Saturday’s game. “This time of year, it’s not so much about the talent. It’s just about the desire you have to go on and continue to play. It’s about being aggressive, it’s about enthusiasm. It’s really more about those kinds of qualities in a team than having the best bats and the best arms.”

As they have proven time and time again this season, the Lady Railsplitters will be ready.

“I know my team is ready,” Goins said. “We are excited and we are going to come prepared to play so whoever we face better hope they are ready.”

HARROGATE, Tenn. — For the fifth time since 2000, a Lincoln Memorial University softball player has been named to the... read more