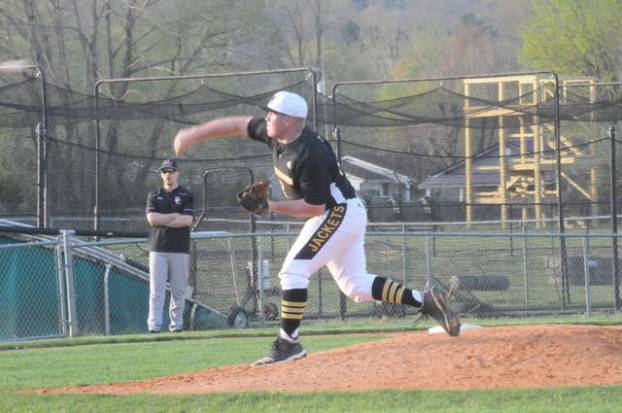 Chris Callihan delivers a pitch in their 6-5 victory over the Harlan County Black Bears on Thursday afternoon.

One day after defeating Harlan County on the road, the Middlesboro Yellow Jackets held their ground at home, downing the Black Bears 6-5 in eight innings.

“We had too many errors tonight,” said Middlesboro head coach John Smith. “We’ve got to clean that up a little bit. We just need to go out and play the game. We think too much. I thought Callihan pitched an excellent game for us, and Tyler (Harris) did an excellent job of closing it out.

“We hit the ball well, we ran well and we kept fighting. That was a very back and forth game. We would grab a lead, they’d tie us and take the lead, and then we would get it back. I’m proud of the way we executed and happy we got the win.”

Things got off to a great start for the Yellow Jackets in the first inning, as they scored two quick runs to take a 2-0 lead over the Black Bears.

Middlesboro’s first run came by way of a Harlan County fielding error on a pop fly, and the second from a line drive double RBI from Lane Perry, giving the Jackets a quick 2-0 lead.

After walking two batters, Chris Callihan allowed Harlan’s Jordan Steele to connect on a line drive RBI double, driving in a run for Harlan County, bringing the score to 2-1 in favor of the Jackets.

On the ensuing play, Harlan County’s Jonathan Wilder stepped in the box for the Black Bears, bringing a run home behind a perfectly laid bunt, tying the game at two runs apiece in the second inning.

Each team’s defense held until Middlesboro’s Shawn North connected on a line drive to the outfield, driving a run home and bringing the score to 3-2 in favor of the Jackets.

To start the fourth inning, the Yellow Jacket defense held the Black Bears, by forcing three straight fly-outs to retire the side.

Harlan County walked Collier Elkins before he stole second base, getting himself into scoring position for the Yellow Jackets.

With Elkins on second, Tyshawn Simpson was hit by a pitch, and took first base. On the ensuing batter, Harlan County turned a 1-4-3 double play, retiring the side. Heading into the top of the fifth inning, the Yellow Jackets held a slim 3-2 lead over the Black Bears.

Wilder led-off for the Black Bears in the top of the fifth, grounding out to first. One the ensuing batter, Callihan forced an errant pass to first base, which then traveled out-of-bounds, forcing a ground-rule double. With a runner in scoring position, Harlan County’s Justin Brown connected on an RBI single, bringing the score to 3-3.

Callihan struck out as the first batter for the Jackets in the fifth inning before Perry was caught out on a pop fly.

With two on and two out, Middlesboro’s Hegen Owens grounded-out to retire the side. Leaving runs on the field, the score sat tied at three runs apiece.

The Yellow Jackets retired all three Harlan County batters in the top of the sixth inning, giving themselves a chance to take a lead.

Wilder led off in the bottom of the sixth inning, striking out. Elkins stepped to the box and delivered a double in the gap between left and center field, but was thrown out at third base on a stolen base attempt, to give the Yellow Jackets two outs.

Simpson delivered a line drive that would end up being a double, thanks to an errant Harlan County throw from the short stop to first base, before stealing third base.

With Simpson on third, Braden Ausmus delivered a line-drive RBI double, bringing the score to 4-3 in favor of the Jackets.

With two outs and two on, Callihan stepped to the box, delivering a line-drive double RBI, bringing Ausmus home, increasing the score to 5-3 in favor of the Jackets.

On the ensuing batter, Perry was walked, leaving two on base for the Jackets. North then connected on a single, loading the bases for Middlesboro. With the bases loaded, Gent was caught out on a fly ball to center field, leaving the score at 5-3 heading into the seventh inning.

After striking out Steele, Callihan allowed Harlan County’s Wilder to connect on a single. Callihan then struck out the ensuing batter, giving the Jackets two outs and one on base.

Harlan County’s Justin Brown delivered a single, leaving two on base for the Black Bears. Benjamin Lewis delivered a RBI double for Harlan County, bringing the score to 5-4 in favor of the Jackets.

With two on and two out, Tyler Casolari delivered on an RBI single, driving in yet another run for the Black Bears, tying the score. The ensuing batter grounded out to retire the side.

Owens led off for the Jackets in the bottom of the seventh inning, striking out. Wilder was walked before stealing second base. Elkins then grounded out, giving the Black Bears two outs, before retiring the side on a Simpson pop-fly.

After pitching a phenomenal game, Callihan was relieved by freshman Tyler Harris. Harris stepped to the mound in the top of the eighth inning, delivering three straight strikeouts to retire the side.

With the score tied at five each, Ausmus delivered a single, thanks to a Harlan County fielding error, prior to being thrown out at second. Chris Callihan then connected on a single, prior to stealing second base. With a runner one second, eighth-grade pitcher Tristan Cooper balked, allowing Callihan to take third base.

North was walked as the next batter, leaving two runners on base for the Yellow Jackets, including the game-winning run on third. Harris stepped to the box for the Jackets, delivering on a single, bringing Callihan home and ending the game with the Yellow Jackets securing the one-run victory over the Black Bears.

“I thought we played a much more intense game,” said Harlan County head coach John Lewis. “I’m excited about the effort we played with tonight. I’m not going to make any excuses for anything. Middlesboro is just a very well coached team, and I think they’re really starting to open up.

“They wanted it more than we did tonight, but it was a hard fought game. Our boy’s didn’t give up, and neither did theirs. We are still learning and rebuilding a little bit. When you’re in that phase, you’re going to get knocked down. It’s all about how you respond to that.”

Herro declares for draft, but says he may return