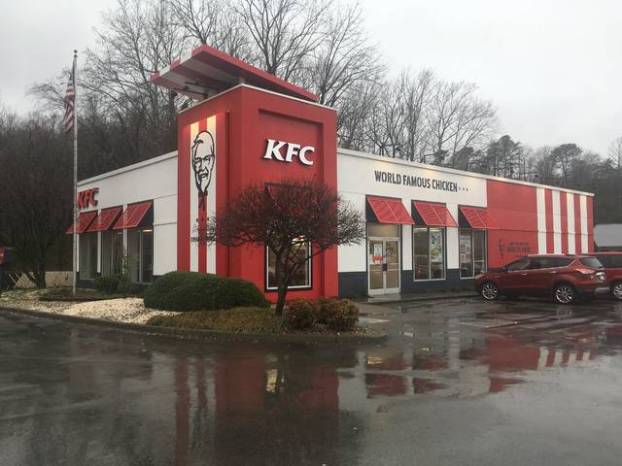 JRS Restaurant Corporation and Middlesboro KFC are celebrating 50 years of serving those delicious buckets of fried chicken to the community, and they are inviting everyone out to celebrate with them.

The business will be holding a “Re-Grand Opening” and ribbon cutting on Wednesday at 10 a.m.

The Middlesboro KFC was the first KFC launched by J. Roy Shoffner with the JRS Restaurant Corporation based in Middlesboro in 1968.

“It happened really by luck,” Mallory Shoffner, granddaughter and also works in the family business explained. “At the four corners of 25E and Cumberland Avenue, there used to be a Gulf Station right in the middle of where the KFC parking lot is now. It was the Shoffner Gulf Station. My grandfather, my dad’s father, decided he wanted to do something a little different and wanted to start his own venture.”

Shoffner explains that her grandfather had the initial plan of putting a robo car wash in that location and had made the plans complete with research. As luck would have it, he ran into an old friend who gave him a new idea to pursue.

“His friend said, ‘have you heard about this thing called Kentucky Fried Chicken, it’s the latest things and it’s going to take the country by storm,’” she said. “My grandfather said, ‘no, I haven’t but how can I hear more,’ and one thing lead to another and he decided that it would be a way better investment than a car wash.”

Her grandfather started the company in 1968, and her father got involved in 1975 before assuming full-time operational responsibilities in 1981. By 1987, JRS opened their fifth restaurant in Pineville, and in 1997, Jay and Kelly bought J. Roy out of the business and took the company over.

JRS owns 43 restaurants that stretch from northeast Tennessee up through Kentucky throughout Louisville and into Indiana. Shoffner says that keeping up with all of them is all about teamwork.

In January, Jay and Kelly Shoffner of JRS Restaurant Corporation received the “Bold Developer of the Year Award” at the Association of Kentucky Fried Chicken Franchises Convention in Orlando, Fla. last month.

“Right now KFC is going through and really pushing the remodel package that we did in Middlesboro,” Shoffner explained. “My parents really jumped on board with that. We did an extensive remodels and really pushed the initiative in our company.

She says she cannot stress the team member mentality because without the team work, they wouldn’t be there.

“My parents couldn’t go remodel, couldn’t grow, and build if it weren’t for the team,” she said. “They’ve been franchisees for almost 30 years, and we’ve been in business for almost 50 years. Really, it truly is a team effort. We’ve grown as a family in our company and really this award is for them. It’s not two people running the show. It’s a whole host of people because if it weren’t for them, we wouldn’t be us.”

Everyone is invited to come out and celebrate with the JRS Restaurant Corporation as they celebrate 50 years of service and community dedication this Wednesday at KFC at 10 a.m.

A Tazewell man remains in jail after he was caught trying to steal a fire truck from the Tazewell/New Tazewell... read more