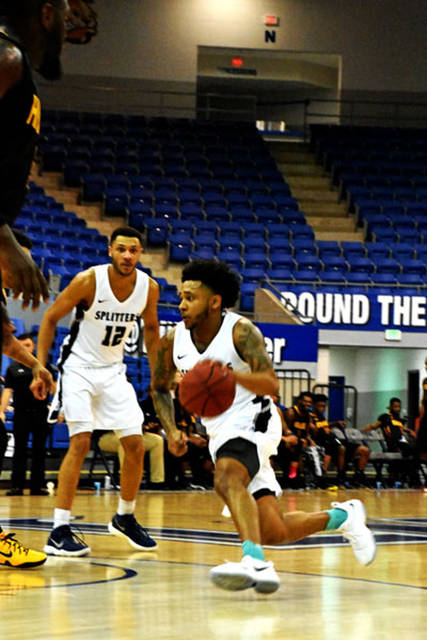 No. 1 LMU continued its dominance on Wednesday with a 109-69 victory over Hiwassee.

HARROGATE, Tenn. — The No. 1 Railsplitters overcame the absence of five rotation players and a spirited first-half effort from the Hiwassee Tigers to pick up a 109-69 win in the final nonconference tune-up of the season on Wednesday night at Tex Turner Arena. Lincoln Memorial (24-1) captured its 20th consecutive home win with the victory and extended its overall winning streak to 13 games.

The Railsplitters’ roster took a significant hit heading into Wednesday’s game as starters Emanuel Terry and Cornelius Taylor as well as rotation players Kamaran Calhoun, Rhondi Hackett and TJ Harvin were ruled out due to sickness. To make matters worse, Hiwassee couldn’t miss early, making seven of its first 10 three-point tries to keep the game close throughout most of the first half.

However, Lincoln Memorial eventually gained some steam by ending the first half on a 9-0 run before blowing things open in the second half and outscoring the Tigers 58-32. All told, the Railsplitters bludgeoned Hiwassee 67-32 over the final 22:15, shot 58 percent from the field and went 15-for-33 from three-point range.

“Hiwassee really played a great first half,” LMU head coach Josh Schertz said. “We gave them some open looks early, they saw the ball go in the basket and got confidence. As the half wore on we did a little better job contesting but by that point the rim was looking huge to them.

“I’m proud of our guys for fighting through in difficult circumstances. Being down five players including a couple starters and rotation guys gave an opportunity for a lot of our younger guys to step up and play. We think we have good depth and these guys need to develop so tonight was a good night to play through mistakes.”

Freshman sharpshooter Alex Dahling was one of the primary beneficiaries of earning some extending playing time, scoring a career-high 21 points on a 7-for-14 effort from three-point range. Dahling scored 15 of his 21 points in the second half to lead to the eventual blowout.

“Alex is a guy that is playing with more and more confidence,” Schertz said. “When he gets looks at open ones we want him to let the ball fly. His confidence has grown exponentially over the last few weeks because he’s gotten more opportunity.”

Trevon Shaw led the Railsplitters with 23 points in 23 minutes off the bench. The reigning AstroTurf SAC Player of the Week went 5-for-10 from three-point range. Romeao Ferguson also reset his previous career high with 18 points on 8-of-9 shooting, while Dorian Pinson racked up 16 points, five boards and five assists. Josh Odem chipped in 13 points, six rebounds and four assists.

With their depth depleted, the Railsplitters played unselfishly and assisted on 30 of their 39 field goals. That represents the second-most assists of the season behind only a 36-assist effort in the team’s 156-69 win over Mars Hill.

Making his first start of the season, Deshawn Patterson handed out 13 assists to become just the fourth player in program history to reach that number. He fell just one shy of matching the single-game program record of 14.

“The margin for error narrowed significantly without those guys so we talked about coming out and not trying to do it yourself,” Schertz said. “We did a nice job on the offensive end of attacking them and making the appropriate play.”

While the Railsplitters thrived once again on the offensive end, Hiwassee exposed some holes defensively, shooting 54 percent in the first half. Lincoln Memorial did take over in the second half and limit the Tigers to just 34 percent shooting down the stretch.

Daniel Graves paced Hiwassee with 14 points on 5-of-8 shooting, while Aario Johnson scored 13 points on a 6-of-10 effort. Marius Williams scored 12, while Tevin Henry and Dess Culpepper contributed nine points apiece. Culpepper led the team with seven rebounds as well.

“There’s a lot of good things offensively but we have got to put together a complete game here as we get to the home stretch,” Schertz said. “It’s been awhile since we’ve played a really solid game on both ends of the floor.

“We’re a really good team but there’s a big gap between really good and elite. Despite the rankings, metrics and record, we’re not elite yet and we’ve got to start getting a little bit better over the next 10 days to become an elite team heading into the most important part of the year.”

The Railsplitters return to South Atlantic Conference play with the final road trip of the regular season on Saturday when they trek to Hartsville, South Carolina to face the Coker Cobras. Tip-off is set for 4 p.m.

The Middlesboro boys basketball team earned its second consecutive road win on Tuesday when they traveled to Jenkins and handed... read more