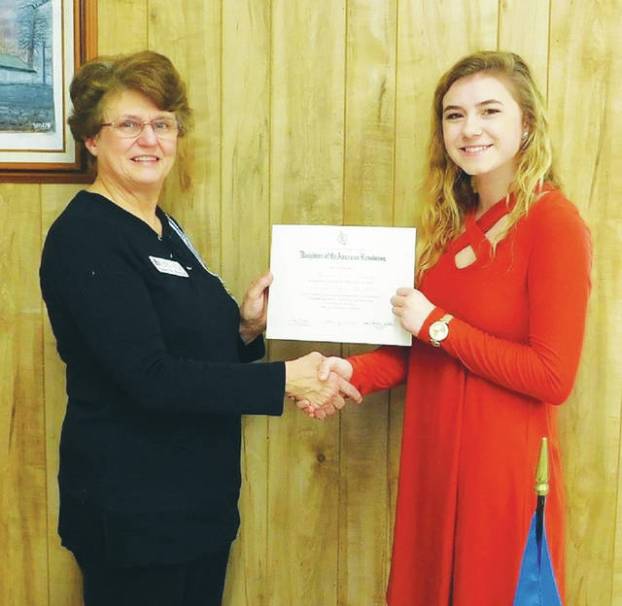 Regent Britton called the meeting to order and began the DAR Ritual. Members recited the Pledge of Allegiance, The American’s Creed and the Preamble to the Constitution. The group sang the national anthem. The Flag Quote was “Old Glory they call me, and I am the American Flag. Under God, with Liberty and Justice for All.”

Joy Burchett’s National Defense minute related to the National Museum of the United States Army which is under construction on an 84-acre site at Fort Belvoir, Virginia. This project is a joint effort between the Army and the non-profit Army Historical Foundation and is expected to open in late 2019.

Agnes Marcum presented the Flag Minute. Any school child will answer “Betsy Ross” when asked who designed our flag. An alternative legend was set off in 1926 by the discovery of the “Hulbert Flag,” which has 13 stars arranged in a diamond shape, as opposed to the circular arrangement credited to Betsy Ross. Another flag designer claim was made by Francis Hopkinson, a signer of the Declaration of Independence.

According to the best-known flag legend, however, George Washington made the first sketch of the Stars and Stripes. A sample was made by Elizabeth (Betsy) Ross, an expert Philadelphia seamstress. Washington showed the flag to the Continental Congress, which approved Ross’ handiwork and passed the Flag Resolution.

Under the Indian Minute, Marcum read about the Choctaw “Doughboys” of World War 1. Prior to their arrival in France in 1918, the Germans had decoded all transmitted messages. After a discovery that these Indians spoke multiple languages or dialects, only four or five which were ever written, a successful plan was adopted to have them transmit telephone messages.

For the DAR School Minute, after providing a report on items submitted to the schools in 2017, Marcum read about the second stop on the 2017 NSDAR School Tour. Kate Duncan Smith School in Alabama is a kindergarten through high school that provides an excellent educational opportunity for students that also instills a sense of patriotism. Their school mission is to celebrate its history, foster patriotic ideals, and promote God, home and country.

For the Veterans Minute, Regent Britton read that Deborah Sampson was one of the first famous women who served disguised as a man during the Revolutionary War. She served under the alias Robert Shurtleff during 1778-1781. Sometime after her deception was detected by a physician, General Washington gave her a private discharge and money to return home.

Under the Women’s Issues and Women’s Health Minute, members were reminded of steps to help prevent flu including frequent handwashing, cleaning of surfaces and avoiding close contact with others. January’s several events and special designations were noted; February includes Black History Month and American Heart Month.

For more than a decade, the Center for the Constitution at Montpelier has sought to become the nation’s foremost training center for constitutional education. It has engaged tens of thousands of professionals from all 50 states and more than 90 nations in the theory and practice of the U.S. Constitution.

Claude Moore Hall, a $4.7 million, 6800 sq. ft., state-of-the-art building, will allow the Center and its partners to create an online community, distribute its experience, and initiate partnerships with peer organizations all over the world. This building was made possible by the generous support of the Claude Moore Charitable Foundation, established in 1987 by Virginia-born Dr. Claude Moore. The 2016-2019 Virginia State DAR Regent’s Project is the underwriting of a conference room in Claude Moore Hall at a cost of $200,000.

Marcum ended by showing pictures of Claude Moore Hall. She added that there are multiple online sources of information about this facility.

During the business portions of the meeting, the secretary and treasurer report were approved, and information provided about upcoming meetings and projects. Chapter members were congratulated on the number of volunteer service hours recorded in 2017 under the DAR “Service to America” program and reminded to start recording 2018 volunteer hours.

Th next chapter meeting is scheduled for Feb. 24. Members were asked to begin collecting suitable items for veterans’ gift bags. The chapter is also continuing to recycle plastic bags and save Box Tops for Education and cancelled stamps for a veterans’ group.