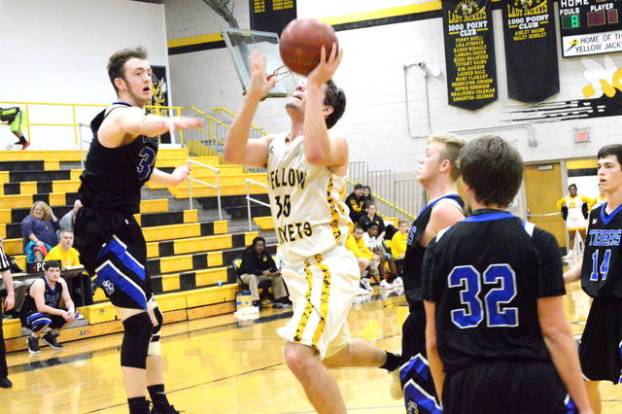 Christian Hubbard goes to the basket during a previous game against Barbourville. The junior forward finished the night with 19 points during Middlesboro’s 80-57 victory over Jenkins on Tuesday.

The Middlesboro boys basketball team earned its second consecutive road win on Tuesday when they traveled to Jenkins and handed the Cavaliers a lopsided 80-57 defeat.

The Yellow Jackets have been on a row lately winning four of their last five meetings including victories over Claiborne, Pineville and Red Bird. The only loss during that span was a one-point defeat to Barbourville.

Jenkins remains winless on the season.

Christian Hubbard tallied 19 points while shooting at a 57 percent clip. He also finished with six rebounds.

While it wasn’t the 30-plus points he put up during the past two games, Drake Thomas was a reliable scorer against Jenkins ending the night with 17 points. TJ Patterson was one rebound shy of registering a double-double finishing the game with 11 points and a team-high nine rebounds.

For four quarters, Pineville and Red Bird went back-and-forth on Tuesday in a clash of 13th Region opponents. With both... read more