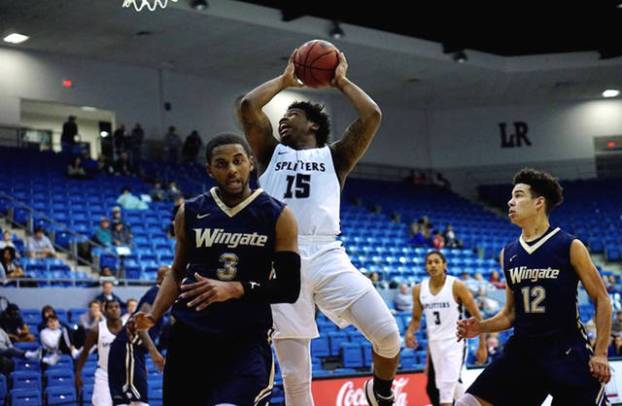 No. 1 LMU extended their nation-leading road winning streak to 20 games with a 93-65 win over Wingate on Saturday.

The No. 1 ranked Railsplitters shook off a slow start to extend their nation-leading road winning streak to 20 games with a 93-65 win over Wingate on Saturday evening at Cuddy Arena.

Lincoln Memorial (23-1, 17-0 SAC) missed its first six shots and started 4-for-15 from the field overall as the Bulldogs (12-12, 9-7 SAC) led throughout the early proceedings. However, the Railsplitters caught fire midway through the first half to pull out to a commanding 20-point lead at the break.

LMU then kept it going with a furious start to the second half to put away its 31st consecutive South Atlantic Conference victory and 12th consecutive overall win. The Railsplitters also extended their winning streak against Wingate to 12 games.

“I thought we played a terrific 17-minute stretch from midway through the first half into early in the second half,” LMU head coach Josh Schertz said. “That was the type of intensity and execution we have to bring on both ends of the floor to become the team we are capable of. Overall it was a good team win as we got contributions from a lot of guy. While it was far from perfect I thought we competed the entire 40 minutes.”

Trevon Shaw missed his first four shot attempts but didn’t miss much after that, finishing a cool 8-for-12 from three-point range to lead all scorers with 24 points to go along with seven rebounds and two assists. Emanuel Terry needed just 27 minutes to rack up 22 points on 8-of-11 shooting – including a couple highlight reel dunks – with 11 rebounds and two steals. Dorian Pinson added 10 points, nine rebounds and four assists, while Romeao Ferguson chipped in 10 points in 15 minutes off the bench.

All told, 10 different players scored for the Railsplitters while eight had at least one assist. Deshawn Patterson led the way with seven helpers in 19 minutes off the bench.

Lincoln Memorial ended up shooting 52.5 percent with a stellar 11-for-23 effort from three. On the other end of the court, the Railsplitters absolutely suffocated the Bulldogs, holding the home team to 33.3 percent shooting and an 11-for-37 mark from three. The Railsplitters gave up just seven offensive boards and obliterated the Bulldogs 54-31 on the backboards in total.

Marco Haskins and Kendrick Tucker paced the Bulldogs with 14 points apiece, while Jeremy Williams had 12 points in 17 minutes off the bench. Neico Robinson did the scoring early for Wingate but finished with just 11 points. Only three other players scored for the Bulldogs with none accounting for more than nine.

Despite a dreadful start shooting the basketball, the Railsplitters trailed just 13-10 after a tip-in from Robinson with 13 minutes left in the opening half. After that, Wingate wouldn’t score again for nearly four minutes as Lincoln Memorial took its first lead of the game and pushed it to 18-13 with a bucket from Pinson at the 9:16 mark.

The two teams traded baskets over the next passage of play as the Bulldogs trimmed the deficit to 22-19 on an old-fashioned three-point play by Haskins with eight minutes left.

But that’s when the Railsplitters officially seized control as Shaw buried two 3-pointers around a bucket from Pinson to kick-start a 19-2 run. Terry capped the run with a jumper at the 3:18 mark that gave Lincoln Memorial an overwhelming 41-21 lead. The Bulldogs never quite recovered after that while the Railsplitters led by as many as 22 before taking a 49-29 lead into the break.

Lincoln Memorial then wasted no time putting the game away for good in the second half, using a 15-0 run that took less than three minutes to assume a commanding 70-36 lead with 15 minutes remaining in regulation.

With the lead well over 30 points, the Railsplitters coasted to the finish from there as the starters exited for good with just under 11 minutes left to play.

Lincoln Memorial controlled the paint, outscoring the Bulldogs 38-10 inside the square. In addition to that, the Railsplitters tallied 14 second-chance points while allowing just five.

The Railsplitters take a break from SAC play to host the Hiwassee Tigers on Feb. 14 for a Valentine’s Day clash at Tex Turner Arena. Tip-off is set for 7 p.m.

The Middlesboro boys basketball team rebounded from a disappointing loss to Barbourville on Friday with a 64-46 victory over Red... read more