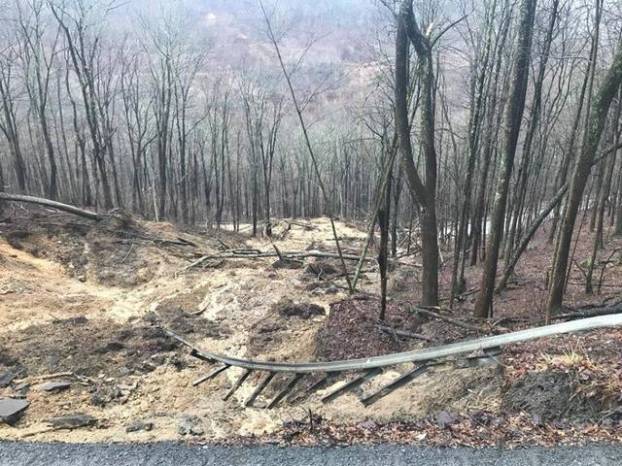 Courtesy of Ky. Department of Corrections

The weekend’s flood caused damage all over Bell County. Part of KY 74 near Middlesboro will be shut down for approximately two weeks.

As Bell County begins to recover from the flooding that occurred over the last weekend, Judge-Executive Albey Brock took the time to speak about it at length.

First, at the conclusion of the Feb. 13 fiscal court meeting, Brock made it a point to thank all those who have helped their fellow man during the worst of the flood.

“We’re still dealing with the second largest flood this community has seen since 1977…there’s not better people on the planet. I’ve watched neighbor help neighbor and then when the neighbor couldn’t do it, they called first responders — and they were there. We take care of each other so much better than maybe you realize…we were really blessed. We dodged a bullet,” he said.

When it comes to assessing the damage done by the water, the various people in charge of such a task were only able to get where they needed to go Monday night as the water finally dropped to an accessible level.

Kentucky Emergency Management will be the agency that comes in to help assess the issues.

When it comes to the areas of damage, Brock stated that it was “pretty even across the county” and that there are areas dubbed “usual suspects” to watch out for when it comes to potential flooding.

“When you get really steep, vertical watersheds that when you get a lot of water fast, it flashes,” he said.

The warning sign for flooding in the area, according to Brock, is when the forecast is three inches of rain or more. “If we get three inches fast, it would wipe us out. It wouldn’t come into town but it would have more roads cut in two and more slides,” he said.

Brock elaborated on calling a state of emergency and his thoughts on it.

“I hate declaring (a state of emergency)…I don’t want to scare you (referring to the community). The first thing that runs through your mind is Houston or New Orleans, hurricane — people are trapped, people are dying. So I’m real reluctant to do that. But it’s important we do that if we need help. So the process is I verbally declare. That tells the folks in Frankfort, the Kentucky Emergency Management folks that ‘Bell’s got a problem. We need to pay attention.’ That tells their folks to be on deck if we need National Guard assistance or water or traffic control assistance,” he said.

Brock officially declared a state of emergency Monday. With that comes the trying time of assessing the damages. It also gives his office permission to execute certain things that would normally not be allowed — such as entering private property with city equipment to remove debris, etc. Bell County has to stay declared under a state of emergency until it is known that federal assistance will not be needed and that local aid will enough to get the job done.

When it comes to lifting the declaration Brock stated, “You can only assess so much at a time. It will depend on how efficiently and accurately we can get our assessments done.”

What is a judge-executive?

In preparation for the upcoming election and to continue the series of exploring what the titles and duties of our... read more