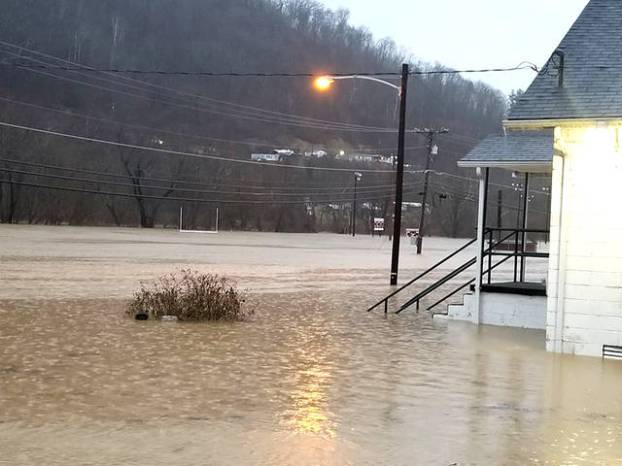 Areas on KY 66 were flooded including the Pineville baseball, softball field and the practice football field along the highway.

Barnett: Problems all over the county

The heavy rain started to fall Saturday and stretched through Sunday causing widespread flooding issues across Bell County and surrounding areas this past weekend. Comparable to the 2015 floods, numerous areas were affected from one end of the county to the other.

“This was a widespread event. The river areas were naturally affected — Straight Creek, Newtown, through Arjay — but we’ve also had road slides and water washed out bridges,” said Bell County Emergency Management Director Ben Barnett. “We have a ton of problems all over the county.”

Barnett said the flood was merely two and a half feet below the flood of 1977, which nearly wiped out Pineville.

“This (flood) was more comparable to the 2015 flood in March. The 2011 flood in Middlesboro was a quick hitter. It was six inches of rain in a few hours and really just affected Middlesboro,” said Barnett. “This one, where it was a slow build up and a river flood issue, caused widespread problems through the county. It really didn’t discriminate.

“This flood actually crested as the second highest flood on record for the Cumberland River in Pineville.”

There was a moment on Sunday when Barnett was contemplating closing the northbound flood walls on U.S. 25E in Pineville.

“We were in range of closing the northbound 25E gate. If we would’ve closed it, we would’ve been well within our guidelines to close it,” said Barnett. “Luckily, (the river) was cresting so we did not close it. We knew it wasn’t going to get any closer than what it was.”

Since cresting around 3:30 p.m. Sunday, the river has been on the decline. As of 12:30 p.m. on Monday, crews were still unable to access the Fourmile community, and portions of the main road on KY 92 were still covered.

“We’re just now, with the water going down, been able to get out in the community to see what kind of damage we have,” said Barnett.

In addition to flooding, there have also been slides that have caused problems across the county. KY 74 going through Middlesboro across Fonde Mountain has a “monster” slide. According to Barnett, the state transportation director said it would take two weeks to get it open.

There have also been slides on KY 217, in the Brownies Creek community and several other places in the county.

As far as house damage, Barnett said he doesn’t believe there is significant damage to houses generally across the county. Anyone experiencing any house damage can call 606-337-5897.

Barnett said they have only had about four calls regarding house damage.

Flooding throughout the area