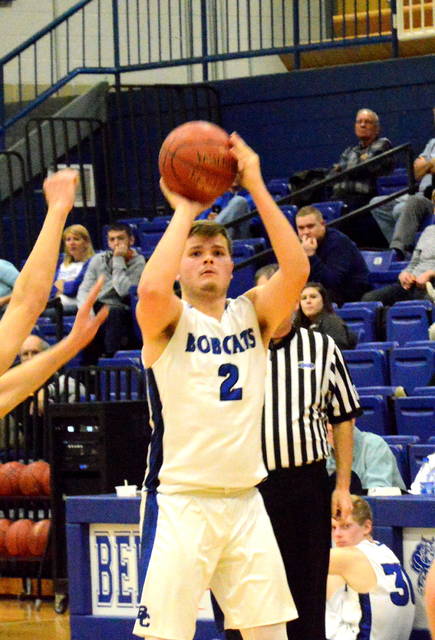 Issac Collett shoots a 3-pointer during Thursday’s game against North Laurel. The junior forwarded scored a team-high 20 points off the bench while hitting five shots from beyond the arc.

From the opening buzzer, North Laurel looked like a team unwilling to relinquish a lead during Thursday’s game on Log Mountain. The Jaguars raced out to a double-digit lead early in the first quarter and only let the deficit drop to single digits once on their way to an 80-69 victory over Bell County.

The defeat gives the Bobcats back-to-back losses for only the second time this season. The first came in mid-January when the team had consecutive losses to Knox Central and Harlan County.

“(North Laurel) is good. They’re really good, and we didn’t quit. There were times we could’ve folded…but we didn’t,” said Bell coach Frankie Smith. “In the second half, we came alive. We had to do some running and jumping and trapping. We had to mix it up. That did give (North Laurel) some difficulties.”

Issac Collett provided the Bobcats with a spark in the second half and gave the team energy off the bench. The junior forward finished the game with a team-high 20 points while hitting five 3-pointers. He scored 14 of his points in the second half.

“He was amazing tonight. People might look on the KHSAA website and say he’s only shooting 33 percent from the three, but I think every three he’s taking I want him to hit because I know he can do something like he just did tonight — come off the bench and give us a bunch of points and hit threes,” said Smith about Collett. “Issac is tough kid. He’s smart too. Issac was definitely the spark, especially in the second half.”

Tyler Partin and Sawyer Brock also had good games from the field. Brock finished the night with 14 points, while Partin hit seven shots from the field on his way to 17 points — including a couple of dunks.

For North Laurel — who won their fourth straight game with the victory — it was Brain Gray and Adam Sizemore who handled most of the offensive duties. Gray finished with a game-high 32 points on 12 baskets. Sizemore hit six 3-pointer on his way to a 24-point outing.

North Laurel raced out to a 9-0 lead early in the first with the help of two 3-pointers from Sizemore. A pair of free throws from Ryan Lambdin ended the run and cut the lead to 9-2 with 5:38 remaining in the first.

A 3-pointer by Trey Brock cut the lead to 10, but the Bobcats couldn’t narrow the lead to single digits for the rest of the quarter. A turnaround jumper at the buzzer by Partin cut the North Laurel lead to 29-13 at the end of the first.

The two teams drew even in the second quarter scoring 20 points apiece to allow the Jags to take a 49-33 lead into halftime.

North Laurel opened the third with a 3-pointer by Sizemore and a layup from Gray to increase their lead to 21. The Bobcats answered with a 6-0 run. A jumper by Sawyer Brock cut the lead to 54-39.

An 8-0 run by North Laurel ballooned their lead to 62-39. After trading baskets, Bell County ended the period on a 6-0 run with every point coming from Collett. The run narrowed the deficit to 64-47.

The Bobcats cut the lead to as little as 11 in the fourth quarter after starting the frame with an 8-2 run. An old-fashion three-point play by Sawyer Brock capped the run and narrowed the deficit to 66-55 with 4:54 remaining in the game.

The lead hovered around 12 points for the remainder of the quarter with a layup by Collett at the end of the game cutting the final deficit to 11.

When his Green Dragons were losing 10 straight games against a tough schedule to start the season, Harlan coach Derrick... read more