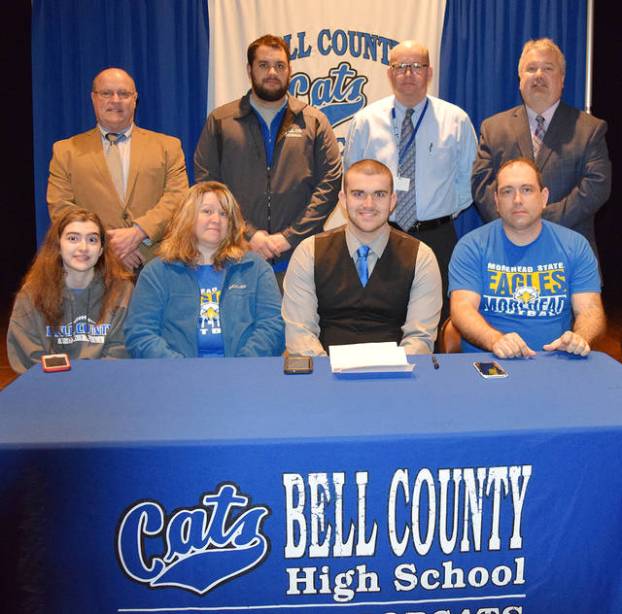 Nick Caldwell became the latest in a list of Bell County athletes to have the opportunity to continue their career at the next level. On Wednesday, the Bobcat senior signed his national letter of intent to play football at Morehead State University.

“This has been a big accomplishment for me. I started in sixth grade and worked my way up,” said Caldwell. “Each year I’ve been preparing to hopefully go and play at the next level and Morehead has given me that opportunity.

“I just want to thank my mom and dad, all the players and fellow seniors I’ve worked with — I really love those guys and they love me, they stuck with me,” he said. “I also want to thank my coaches and my Lord and savior Jesus Christ for always being there for me every game.”

Caldwell was recruited to play offensive tackle by the Eagles. He played the position all four years at Bell County. This past season, he helped anchor an offensive line that allowed the team to rush for 3,208 yards. During his junior campaign, he helped the team rush for 2,616 yards.

As well as his time on the offensive line, Caldwell he also contributed on the defensive side of the ball. As a senior, he tallied 59 tackles.

As for the reason why Caldwell chose Morehead, he said it was mainly because of his education.

“Education is very key up there. I love the Eagle Center they have. They always have someone coming by to help you,” he said. “I’ll be going up there to start a five-way program so I’ll be adapted to the academics.”

Morehead State is a member of the Division I Football Championship Subdivision and participate in the Pioneer Football League. The Eagles finished 3-5 in league play and held a 4-7 overall record.

Other teams that participate in the Pioneer Football League include Dayton, Davidson, Butler, Valparaiso, Drake and several others.

Jay Compton of the Pineville Sun contributed to this report.

From the opening buzzer, North Laurel looked like a team unwilling to relinquish a lead during Thursday’s game on Log... read more