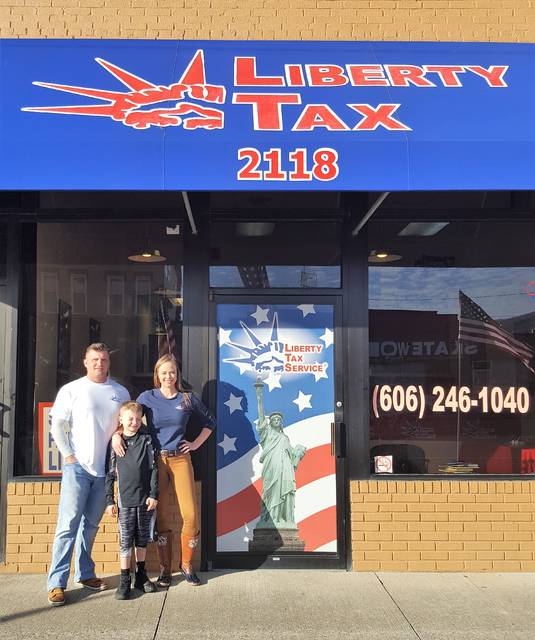 Todd and Brittany Smith, with son Ayden, pose outside their business on West Cumberland Avenue in Middlesboro.

Brittany and Todd Smith know from experience that even the best laid plans can change. Both graduated from Southeast Kentucky Community & Technical College (SKCTC) in 2010 prepared for careers in the health care industry. Brittany earned associate of arts and science degrees and completed a handful of allied health certificates. A former U.S. Marine, Todd completed the Respiratory Care program and went to work as a respiratory therapist at Claiborne County Hospital. His job allowed Brittany to stay home with their newborn son, Ayden.

In 2012, Brittany went back to work in an unrelated field. When she was hired as a tax preparer for Liberty Tax Service in Middlesboro, it seemed that she had found her calling. Within two weeks, she was promoted to manager. After five years in this role, Brittany received an unexpected opportunity — to purchase the business.

The hardworking husband and wife team decided they were up for the challenge. They met with Sam Coleman at Southeast’s Small Business Development Center and developed a plan that would allow them to go forward. In December 2017, Brittany and Todd became business owners.

Liberty employs anywhere between 12 and 20 employees, depending upon the season. Their most visible employees are students who wear the Statue of Liberty costume to advertise on Cumberland Avenue and Hwy. 25E. Brittany laughs when she reveals that her mom and husband have both become trained tax preparers. The business gives free tax services to military, teachers, firefighters, and police officers. In their off season, Brittany and Todd give back to the community by helping students complete their FAFSA forms and offering tax form assistance for parents enrolling their children in the Bell-Whitley Head Start program. They also offer free auditing services to local businesses and donate generously to local youth organizations.

Brittany says she had imagined being her own boss would make life easier but admits she now works harder than ever. Even though Todd plays an active role in the business, he continues to work full time for the hospital. When asked what advice she would give anyone considering business ownership, Brittany stresses the importance of patience, motivation, and a strong belief in self. Have a plan, she says, and “just go for it!”

To place an event in the Community Calendar, email: beth.key@harlandaily.com or drop a written copy of the announcement by our... read more