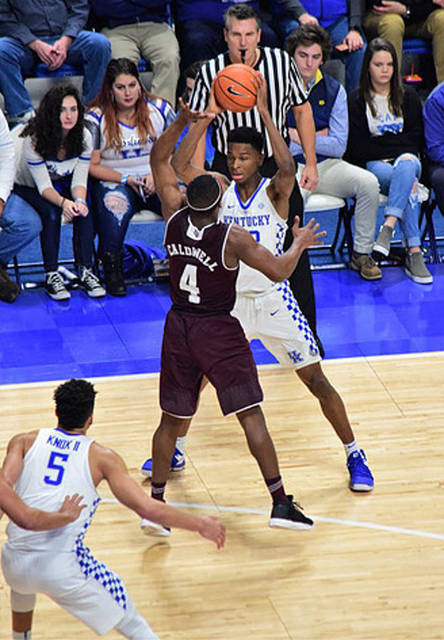 For the first time in its history, Kentucky lost to Missouri on Saturday in a 69-60 upset.

Behind 16 points each from Jordan Barnett and Kassius Robertson, the Tigers finally cleared that Big Blue hurdle with a 69-60 victory against the No. 21 Wildcats.

“It’s definitely a really good win, but that’s maybe how I look at it — it’s just another win,” Barnett said. “We’re going to keep competing and hopefully put together a string of wins. I’m not treating this one any different just because of the name on the front of the jersey.”

Kentucky won at least a share of the SEC regular-season basketball title the last three years, while Missouri finished last each time.

Martin said he didn’t realize Missouri had never beaten Kentucky until he was asked about it after the game.

“It’s good for our guys, because there have been some tough years,” Martin said.

The Wildcats didn’t look like a typical Kentucky team. They shot just 31.3 percent from the field and finished with only nine assists.

“The biggest thing is we refuse to pass the ball,” coach John Calipari said. “I don’t have any answer for that.”

Kentucky, which started five freshmen, had only one player reach double figures. Shai Gilgeous-Alexander finished with 15 points but made only 5 of 16 shots.

Missouri led 28-18 at halftime. Late in the first half, Kentucky’s Jarred Vanderbilt took exception to Jared Geist’s box-out, wrestled Geist to the court and had to be restrained. Both players received technical fouls, and Vanderbilt was assessed a flagrant foul.

Early in the second half, Geist drew a flagrant foul for elbowing Gilgeous-Alexander in the face.

The Wildcats had erased double-digit deficits the last two games in victories over West Virginia and Vanderbilt, but their poor shooting against Missouri’s stingy defense ensured there would be no rally this time.

The Wildcats cut the lead 33-32 on Jalen Knox’s layup with 16:14 remaining. Then Missouri went on an 8-0 run, started with a 3-pointer and transition layup by Porter and finished with Barnett’s 3-pointer. The Tigers maintained the lead the rest of the way.

“Give Missouri credit,” Calipari said. “They did a great job and fought. I thought we had our chances at the start of the second half, and then we come down and do freshmen stuff.”

Kentucky: The Wildcats made just 2 of 20 shots from 3-point range. The Wildcats’ nation-leading streak of 1,035 straight games with a made 3-pointer — dating to Nov. 28, 1998 — was in jeopardy until Wenyen Gabriel made one with 2:53 left in the game.

“I would imagine they would make more if nobody was on the floor, so we had something to do with it,” Martin said, referring to Missouri’s defensive effort. “We did a good job of playing the scouting report.”

Missouri: The Tigers have played themselves back into NCAA Tournament contention in the last week with two straight victories over top-half SEC teams. Missouri won at Alabama on Wednesday.

“To experience what I experienced those first two years and to have the type of success we’re having now, it’s great,” junior forward Kevin Puryear said.

STEADY AS HE GOES

In the first half, Barnett was a non-factor, going 0 for 3 from the field. In the second half, he was far more assertive and scored 12 points.

“I give him credit — he’s like this the whole time,” Martin said, moving his hand on a horizontal plane. “He’s flying a jet from here to Asia, and he’s just cruising. It doesn’t matter what happens, turbulence, he’s the same the whole time. That’s a skill, because he’s locked in on the next thing. He doesn’t get concerned with what just happened.”

Puryear complimented Barnett — sort of — for his resilience.

“I mean this in the nicest way possible, but Barnett just doesn’t care,” Puryear said. “He’s going to shoot the ball. He has no conscience whatsoever.”

Knox, who entered the game averaging 15.6 points, scored just five points on 2-of-6 shooting. Knox, a highly touted freshman who considered Missouri before signing with Kentucky, was booed by the Mizzou student section each time he touched the ball.

Vanderbilt said there was no connection between the fans’ reaction and Knox’s performance.

“You have good games, you have bad games,” he said. “This just happened to be one of them.”

“But it wasn’t just Kevin,” he said. “We made one jump shot in the first half.”

Registration for AYSO spring soccer in the tri-state area is now open. Children ages 3 to 18 can be registered... read more