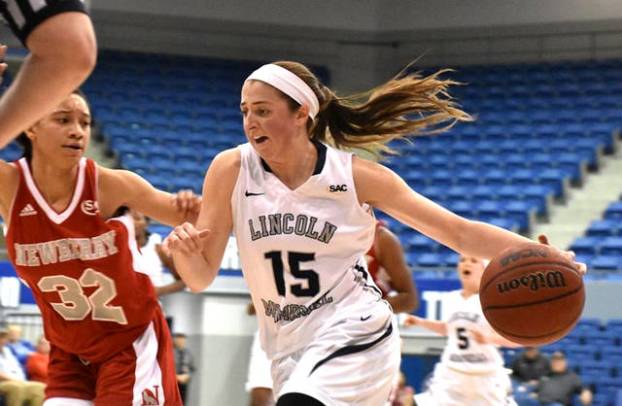 Shea Coker’s 20 points led LMU (13-8, 9-6 South Atlantic Conference) during their victory over Newberry on Saturday. She also pulled down six rebounds and had two blocks.

Shea Coker’s 20 points led LMU (13-8, 9-6 South Atlantic Conference) for the game. She also pulled down six rebounds and had two blocks. Qua Hines came off the bench to score 15 points, including an 8-for-10 performance from the free-throw line.

Emily Griffith scored 11 points and had five rebounds while Ross Mathis had 10 points and seven assists. Jordan Brightwell had a game-high seven rebounds.

The loss spoiled a career night for Newberry’s Meg Essex, who had a career-high 34 points to lead all scorers for the Wolves (11-10, 6-8 SAC). Samara Hill chipped in 10 points while Shelby Britten had nine points and eight assists. Hannah Lepaio led the Wolves on the boards with six rebounds.

When the two teams met back in mid-December, the Lady Railsplitters had one of their worst offensive performances of the season as they shot only 26.9 percent. Saturday they nearly doubled that total by hitting 50 percent (27-54) of their shots.

That also extended to the three-point area, where they also hit 50 percent (8-16) of their attempts, which is their second-best performance from behind the arc this season. They also had a solid day at the charity stripe as well, going 21-26 from 80.8 percent.

The Lady Railsplitters got a little payback on the boards as well as they out-rebounded the Wolves, who had won the rebounding battle in Newberry by six board, by a 38-30 margin. Their bench also out-performed NC’s by a 30-10 margin.

Newberry had a poor day from the field, hitting only 39 percent of their shots. They also went 6-21 from three-point range for the game, including 1-10 for the second half. The free-throw line was no better, as they hit only 68 percent of their free throws for the game.

LMU went out to the quick 5-0 lead off of a 3-pointer by Mathis and a basket from Elizabeth Jones. Newberry then went inside to Essex (who scored the first eight points of the game for the Wolves) and used a small run to take a 14-12 lead.

The teams traded leads for the rest of the stanza, with LMU taking the 22-19 lead off a Hines trey with a little over a minute left.

The Lady Railsplitters scored four quick points to open the second period but Newberry put together a 10-2 run midway through the frame to grab a 31-28 lead. A jumper by Cameryn DuBose on the next possession sparked a 7-0 run by the Blue and Gray as LMU pulled out to a 35-31 lead.

Baskets by Essex and Hill would cut the lead to 38-36 at the half.

Essex tied the game almost immediately as the third quarter started as Hill found her in the paint for the layup. LMU then scored the next seven points, with five of them coming from Brightwell, to take the 45-38 lead at the 7:52 mark.

LMU then went cold from the field for the next three minutes, which allowed Newberry to cut the lead to 45-44. As quickly as they went cold, however, the Lady Railsplitters caught fire from the field, going on a 19-6 run to close out the period.

Newberry would cut the lead to 10 on three occasions in the fourth quarter, but could get no closer as LMU coasted to the 83-69 victory.

LMU goes on the road for the next two games, travelling to Anderson Wednesday and Wingate Saturday. Anderson is currently 14-8 overall and 8-6 in the SAC following their 75-69 win over Catawba. Game time is set for 6 p.m. from the Abney Athletic Center.

For two quarters, Middlesboro was able to keep the game close against rival Bell on Friday. The Lady Cat defense... read more