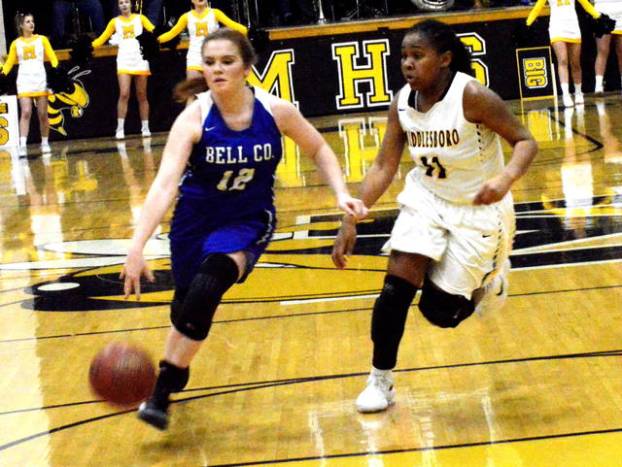 For two quarters, Middlesboro was able to keep the game close against rival Bell on Friday. The Lady Cat defense put a stranglehold on the lead in the third limiting the Lady Jackets to a single point en route to a 54-31 victory.

“I told them after the game that I thought that was as good of a defensive effort as we’ve had this year,” said Bell coach David Teague. “I told them that I was proud.

“We executed our game plan and the things we wanted to try to take away. I thought that we frustrated (Middlesboro) and tried to take away some of their scoring options. I give credit to the kids…for a good job doing that.”

For Bell County, the victory essentially guarantees the Lady Cats will play Harlan in the opening round of the district tournament later this month. The two teams will clash on Tuesday to determine who will be the No. 2 and No. 3 seeds in that match-up.

Middlesboro will finish the regular season without a district win after the loss and will battle Harlan County in the opening round of the district tournament.

Lakin Burke was the only player for Middlesboro to break double digits with 12 points. Baylee Woody and Jamayha Poe chipped in six points apiece.

“It was one of those nights. We’re the kind of team that defines ourselves on the first few minutes of the ball game. We have a hard time bouncing back when we start out slow,” said Middlesboro coach Bethany Evans. “We couldn’t get anything going on offense. They got they’re head down, (and) they got frustrated. We just quit. We gave up.

With 4:28 remaining in the half, Middlesboro trailed 23-17. The score remained intact until Harris hit a pair of free throws to give Bell a nine-point lead. Harris ended the half with a steal and layup to give the Lady Cats a 27-17 lead heading into halftime.

Bell County seized control of the game in the third quarter. After a Cupp layup opened the frame, Woody scored Middlesboro’s only point of the quarter on a free throw to narrow the deficit to 29-18 with 6:13 remaining.

The Lady Cats used an 11-0 run to finish the quarter with a 40-18 lead. During the stretch, Cupp scored four points, Cox tallied five points and Harris scored on a floater.

Burke ended Middlesboro’s scoring drought with a free throw to open the fourth that cut the lead to 40-19 with 7:05 left to play. Consecutive baskets from Cupp and Harris increased the Lady Cat lead to 44-19.

The two teams traded baskets midway through the quarter before a layup and 3-pointer from Burke cut the deficit to 49-29. The Lady Cats outscored Middlesboro 5-2 down the stretch to claim a 23-point victory.

Middlesboro (8-12) travels to Claiborne, Tennessee at 6 p.m. on Monday.

Middlesboro had more on the line than simply a rivalry during Friday’s clash with Bell County. A win over the... read more