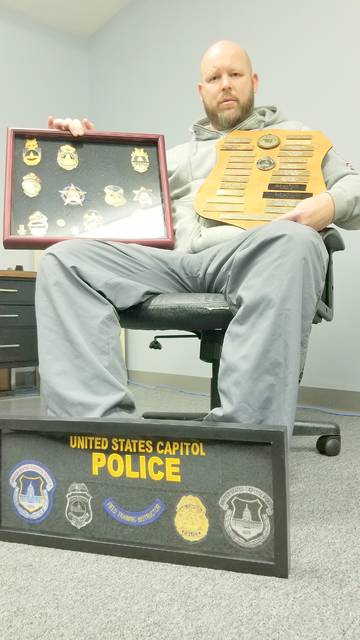 Tim Jones with just a selection of the awards he won when he played sports in his youth, as well as the special badges he accumulated during his service as a Capitol Police officer.

Editor’s note: This is the second installment in a three-part series.

Middlesboro man Tim Jones had a decade long and storied career as an officer with the Capitol Police. He grew up playing sports and genuinely giving his all for every passion he took on until it was all taken away from him one day while he was on leave. At first he thought his lagging performance at his job and feeling generally “off kilter” was thanks to the stresses of divorce — but it ended up being more than just emotional turmoil. His body was fighting against him in a life-threatening way.

Jones could barely move and couldn’t speak at all. His parents managed to get him in the car and get him to the hospital. Jones describes the feeling as having an out-of-body experience.

Despite his dire health, Jones recalls the car ride to the hospital and how fearful his mother was as to what could be happening to her son.

At the hospital, doctors and nurses scrambled around Jones trying to figure out what the problem was. All Jones could do was look on in confusion and fear as not only was he completely in the dark as to what was happening to his body — but the doctors were as well.

This began Jones battle with TTP (thrombotic thrombocytopenia purpura). It took doctors some time to figure out that Jones had TTP, as doctors performed a battery of tests on him to rule out other possibilities such as a brain tumor or cancer.

These days in the hospital, weak and confused, his mother constantly at his side, were more than trying for Jones. In a book, “God’s Mighty Warrior,” written by Dusty Caudill, he states numerous times how fearful, confused and lost he felt during all of this.

After initial testing, doctors had determined that something was causing Jones’ platelets to drop to life threatening degree. Platelets, among other things, are what allow the blood to clot when injured. Doctors said if this continued to happen, his body would essentially shut down. Jones’ platelets were so low he could bleed to death from even a slight injury. To curb this possibility, the doctors suggested plasma transfusion.

The first transfusion was a traumatic one, as Jones bled profusely due to having to have an incision on his neck for the insertion of a tube that would transfuse the plasma. But the doctors got the bleeding under control and Jones came out fine — this being the first of many transfusions that were to come.

During this time, Jones stated he wasn’t sure how much time had passed while he was in the hospital. He recounts questioning his faith and having visions of God in his sleep.

The most worrying thing, however, was that doctors still did not know what was wrong with him. Results regarding the possibility of a tumor or leukemia were ruled out, but negatives without answers were not that comforting.

One day in the hospital, Jones finally received his diagnosis of TTP. Although a diagnosis was finally given, Jones states in his book that the rarity and severity of the disease was such that he was still frightened and confused. He didn’t understand how or why he gotten TTP — and the doctors couldn’t tell him either. They could, however, continue to give him his transfusions and other treatments that could get his platelet count back up. As unpredictable and physically devastating as Jones learned TTP is, he at least knew what he was fighting. He just did not know for long the harrowing fight would be.

The treatment was successful. His platelets were up to a safe range and he was discharged to go home. He needed weekly blood tests done at the local hospital to monitor his condition, but he was stabilized for a time. One day Jones gets a call that his platelets had dropped dangerously low again and he had to come back to the hospital — thus beginning the nightmare all over again.

“I felt like my days were numbered and I didn’t want to spend the rest of them hooked to a machine in a sterile hospital room,” said Jones.

Rita Haldeman has joined the community as the new group publisher for the Middlesboro Daily News, Harlan Daily Enterprise and... read more