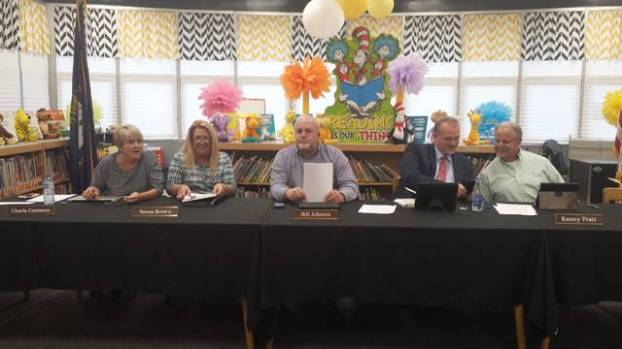 Middlesboro Board of Education met Tuesday evening in the Middlesboro Elementary School’s library.

This meeting also marked the first in close to four years in which former superintendent Steve Martin was not present. Instead, sitting in his position was Middlesboro Independent Schools’ current interim superintendent, Director of Pupil Personnel, Waylon Allen.

Doctor Anthony Maxwell presented last year’s test scores to the board, in which Middlesboro High School remarkably managed to score among the top 18 percent of high schools in the state.

Along with this accomplishment, all schools in the district noticeably closed in their GAP scores, which consist of groups of children who have been historically known to have an achievement gap. Most notably, Middlesboro Elementary School’s GAP score improved a whopping 54 points, putting their overall score at a 70.

“We showed incredible improvements across the board, but I believe the GAP was what was really the most impressive,” said Maxwell.

District leaders claim these improvements come from the school system’s drive to see each student succeed in life, not only as a whole, but individually as well. The district proves this by testing each student individually, as well as providing them with the opportunity to be tutored and mentored one-on-one in a friendly environment.

“It definitely made a difference that each student was aware of where they were and where they needed to be. Everyone was on focused on the same goal of closing the gap and moving the novice students up to where they needed to be. We all wanted to make sure all of our students were on the right track,” said Maxwell. “It was honestly just intentional planning throughout the year that made this possible.”

It is no secret that the Middlesboro school system makes it a goal to reach out to each student, as is being strongly displayed this year through home visits to pupils who have ongoing attendance or disciplinary issues, thus placing their attendance at an all-time high and greatly decreasing disciplinary problems.

The district also places emphasis on producing confident future leaders out of each generation of students they teach, which is why each school has begun allowing students to take on more and more roles within the building, with student-led announcements, as well as allowing students to operate each open house.

Another focus of the meeting was on the ongoing construction work currently being carried through at the elementary school, which appears to be coming along quite productively, as it is falling right on schedule. According to Middlesboro Elementary principal Randy Rose, the work has not hindered the classroom experience in any way, and has been the cause of minimal to no interruptions.

The next Middlesboro Board of Education meeting is scheduled for November 21, in which a new superintendent will be named and sit among the board.

The most prescient matter at the Oct. 17 Bell County School Board meeting was that of the Elgin social worker... read more