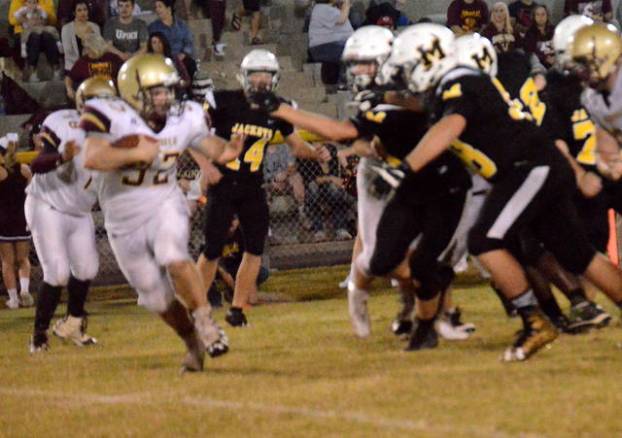 Lawrence Simpson looks for running room during Pineville’s game against Middlesboro earlier in the season. Simpson will be one of the seniors recognized when the Mountain Lions host Harlan for senior night on Friday.

The Pineville-Harlan rivalry continues on Friday in what will be a battle for third place in the district. Both teams lost to Williamsburg and Lynn Camp earlier in the month to set up this third place showdown.

Looking back over the past seasons, the Mountain Lions have closed the gap on what had been a lopsided series. Since 2007, the Green Dragons hold a 7-3 series lead with all three losses coming within the past four years. Last season, Pineville handed Harlan a 22-19 defeat that cost the Dragons a shot at hosting a playoff game.

Those same odds won’t be on the table this year with the loser traveling to play Hazard and the winner headed to Pikeville.

This season hasn’t been a memorable one for Harlan. The team has only been able to pick up victories over Magoffin County and Jenkins. A 14-12 loss to Middlesboro has been their smallest margin of defeat all year.

The rushing attack, which has been the bread and butter for Harlan for as long as anyone can remember, has garnered 1,081 yards this season. John and Kendal Brock have been the leaders of the ground game combining for 752 of those yards.

Kilian Ledford lines up behind center for the Dragons and has thrown for 440 yards and four touchdowns on the year. He has also tossed four interceptions this season.

Will Varner has been the only real threat in the passing game for Harlan. The junior wide out has hauled in 19 receptions for 254 yards and four touchdowns. No other receiver has caught more than two passes this year with Ethan Clem coming in behind Varner with 53 yards on two catches.

The secondary has been one of the bright spots of the Dragon defense this season. The group has grabbed seven interceptions. Jarrett McKenzie has hauled in three of those and returned two for touchdowns. Jon Eldridge also has three interceptions on the year.

Ledford is the team leader in tackles with 67. Braydon Shanks and Clem have tallied 44 and 42 tackles, respectively.

LEXINGTON (KT) — P.J. Washington was born in Louisville, but the Kentucky freshman doesn’t remember much more about his brief... read more