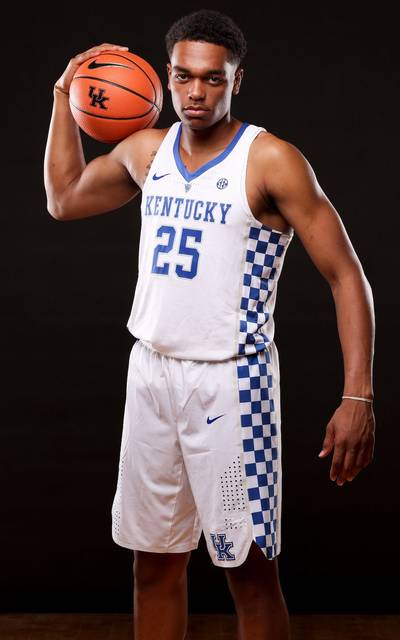 Kentucky newcomer P.J. Washington said playing for former NBA star Penny Hardaway helped prepare him for what he will face in his first season with the Wildcats.

LEXINGTON (KT) — P.J. Washington was born in Louisville, but the Kentucky freshman doesn’t remember much more about his brief stay in the Bluegrass.

“I was a little over three months old when we moved,” he said. “I don’t remember a lot about Louisville, other than being born there. I was just born in Louisville. That’s about it.”

Washington, one of the top players in this year’s freshman class, spent this summer playing in the FIBA U19 World Cup, led by Kentucky coach John Calipari. Although a heralded prospect prior to the event, Washington said playing against superior competition improved his overall game.

“It elevated my game playing against different guys — overseas guys and how they play the game differently over there,” Washington said. “It was great seeing the guys before I got here and just seeing how other people play all over the world. I was just focusing on my game, trying to get better.”

The event also gave Washington a chance to get a feel for Calipari’s coaching style as well as playing alongside future teammates Hamidou Diallo and Kevin Knox II.

“It was great playing under Cal,” he said. “I got to play with Hamidou (Diallo) and Kevin (Knox) a little bit and it’s just great. He’s for his players and he loves his players and he’ll do anything for them. You’ve just got to do what he says. That helped me a lot, just being with my family before (coming to Kentucky). We spent a lot of time together.”

Playing under a high-profile coach was nothing new for Washington, who played under former NBA standout Penny Hardaway on the AAU circuit.

“I played for Penny (Hardaway) for three years,” Washington said. “He’s a great coach. He’s a great mentor to me. He’s done a lot for me — Basketball-wise and my family. I just love the guy. He’s a great guy.

“He knows everything the ins and outs about basketball and just being a man … facing the problems head on.”

Washington admitted he wasn’t aware of Hardway’s status as one of the top guards of his era.

“When I first started playing for him, I really didn’t know that much about him,” he said. “I typed his name (on YouTube) and watched all his highlights, I was just amazed that he was my coach. I’m so close to him. I feel like Penny was a great player and I feel like if he didn’t get hurt, he would have been one of the greatest of all-time.”

Although he got an early start on what its like playing under Calipari and Hardaway, Washington still had to get used to the collegiate ranks both athletically and academically.

“The workouts are a lot longer here,” Washington said. “In high school, you work out like 30 minutes in the weight room and here, it’s 30 minutes to an hour every day. It’s definitely changed my body.”

Because of his status as a high-profile recruit, Washington hasn’t been fazed by Kentucky’s status as one of the top programs in the nation.

“I know what to expect,” Washington said. “It’s a high-profile program, but as long as you come in and do your stuff every day, you will do great.”

Washington’s biggest fear is not reaching his full potential.

“It’s just not reaching my full potential,” he said. “I feel like working hard every day, I can do it I can do anything I want to do. I just feel like if I don’t do that, I mean I know what would happen, but I just don’t want that to happen.”