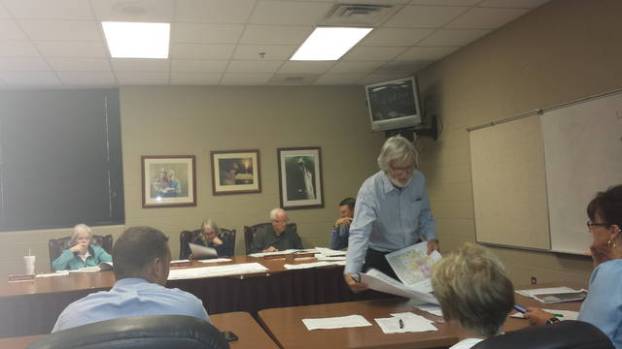 Bill Richardson presented his final construction plan for the district at Monday’s Pineville School Board meeting.

With both a steady plan for rejuvenations and exceptional test scores, the Pineville Independent School District seems to be well on their way to writing this school year off as a success.

Monday evening’s Pineville School Board meeting featured an appearance from Bill Richardson, who is in charge of organizing, and carrying through with, the architectural improvements the district is soon to undergo.

Richardson, owner of Richardson Associates Architects, gave a brief update on the status of the paperwork, which is more than half complete.This means the beginning of the rejuvenations is right around the corner.

After only a few changes from the board (which included moving a suggestion to the alternate section, as well as moving an alternate into the base plan), the final plan was approved unanimously and will soon be sent in to the state to begin taking in bids. The plan should be ready to move off of the paper and on to the actual school buildings sometime around the beginning of 2018.

“Everything you guys suggested were great ideas and improvements, and I appreciate your input and interest in the plan. I believe we’re all ready to get this out there and begin taking bids,” Richardson said to the board, completing his presentation.

However, the construction plan isn’t the only series of improvements being made in the school district, as was proven with the reveal of last year’s test scores.

Along with state testing, the district also experienced a two point jump in their overall ACT score, placing them above the state average with an overall composite of 19.9, with each category experiencing improvements.

As even those in charge of scoring the ACT are quick to inform, a mere one-point jump on this college readiness assessment is quite the accomplishment, whereas a two-point jump is something many would dare to label miraculous.

“As many have pointed out, the students obviously worked very hard, but so did the teachers,” said William Keys, principal of Pineville High School. “This year we are going to work even harder, and regardless of where we end up, it definitely won’t be for a lack of trying.”

A rock fall that killed an employee at a Whitley County surface coal mine in March happened after the operator... read more