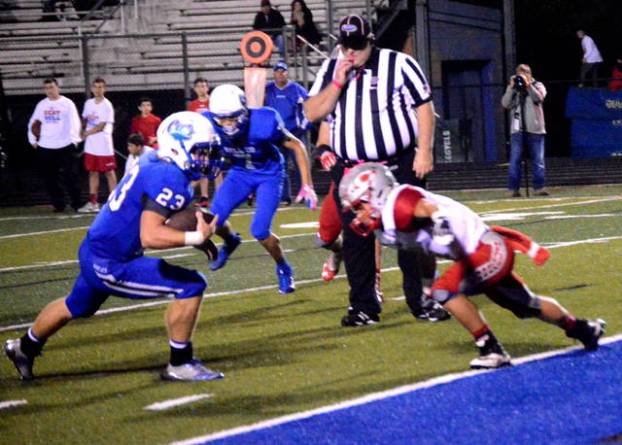 Colby Frazier dashes toward the end zone during Bell County’s 42-8 loss against Corbin on Friday. Frazier was held to just 31 yards and one touchdown on 15 carries. The Bobcats were held to 22 yards rushing as a team.

Stopped in their tracks: Bobcats held to 22 yards rushing in 41-8 loss

The first two drives told the story of game when Bell County hosted Corbin on Friday. During that stint, the Redhound defense held the Bobcats to three-and-out. The Corbin offense went on to score touchdowns on their first two drives en route to a 42-8 victory over Bell County.

For the Bobcats, the loss makes Friday’s game against Jackson County a battle for third place in the district. Corbin will battle Casey County on Friday for the district championship.

“(Corbin’s) a good football team. I’d take (Cameron Sizemore) on my team, and I think I’d be pretty good too. That’s what I told him after the game,” said Bell coach Dudley Hilton. “We just don’t have kids with any experience. We’re talking about a team (where) we had two guys on defense last year — you had the Thompson boy that moved away and you had Keegan (Lefevers). (Keegan) got hurt the first game.

“You’re talking about a big time quarterback coming in here with big time receivers and everything else. I knew it would be rough. You have to give (Corbin) a lot of credit. They’re a good football team. We’re just not their yet. We’re playing with kids that ain’t experienced.”

The Redhound defense, which has dominated their opponents all year, held Bell County to just 22 yards rushing and 57 yards passing. Colby Frazier, who was averaging 147 yards and 2.9 touchdowns entering the match-up, was limited to just 31 yards and a touchdown.

While the Redhound defense pressured him the entire game, Issac Collett went 4-for-8 for 44 yards on the night and tossed one interception. Antonio Zachery, who entered the game late for Bell, completed one pass for 7 yards. Jason Jones and Chandler Mink each caught two passes for 21 and 14 yards, respectively.

Cameron Sizemore continued his past success against Bell County going 12-for-16 for 236 yards and three touchdowns. Jacob Steely and Cameron Barton paced the receiving corps. Steely hauled in a team-high 80 yards and one touchdown. Barton caught two passes for 63 yards.

On the ground, Sizemore rushed for 32 yards and a touchdown. Dylan Massengil and Chase Estep ended the game with 38 and 32 yards, respectively.

Corbin jumped out to an early lead after holding the Bobcats to three-and-out on the opening drive of the game. A blocked punt gave the Redhounds possession at the Bell County 22. Sizemore capped the five-play drive with a 2-yard touchdown run with 7:12 left in the first. The Caleb Mitchell extra point gave Corbin a 7-0 lead.

Another three-and-out for Bell set the Redhounds up for another touchdown. The nine-play drive ended when Cameron Maguet found pay dirt on a 6-yard run to give Corbin a 14-0 lead with 43 seconds left in the first.

The Bobcats found a little momentum on the ensuing drive grabbing a first down on a 14-yard pass to Jordan Wombles. Two plays later, what looked like a perfect pass was tipped and intercepted by Corbin.

The Redhounds took advantage going 45 yards in five plays. Estep capped the five-play drive with a 1-yard touchdown with 8:50 left in the half. The Mitchell extra point increased the lead to 21-0.

Corbin gained possession after forcing Bell County to a quick three-and-out on the ensuing possession. After the punt, Sizemore hit Mitchell on a 44-yard touchdown strike to balloon the lead to 28-0 with 5:48 remaining in the half.

A big kick return by Mink gave the Bobcats their best field possession of the half. The excitement didn’t last long. After starting the drive at the Redhound 34, a fumble on the first play returned possession to Corbin.

After both teams went three-and-out, Corbin punched the ball into the end zone on a 5-yard touchdown pass from Sizemore to Jordan Fox. The two-point conversion pass to Estep gave the Redhounds a 36-0 lead to end the half.

On the opening play of the third quarter, Sizemore hit Steely for a 66-yard touchdown pass to give Corbin a 42-0 lead with 10:31 left in the third.

The score would hold firm until 5:04 in the fourth quarter. After an unsportsmanlike conduct penalty on a punt, Bell took over at the Corbin 30. Frazier ran for 15 yards on three plays to move the ball down to the Redhound 16.

Collett hit Mink twice for 9 yards to push the Bobcats to the Corbin 7. Frazier capped the six-play drive with a 7-yard touchdown run. Collett connected with Mink to convert the two-point attempt and narrow the deficit to 33.

Corbin (7-1) will host Casey County (8-0) on Friday for the district championship.