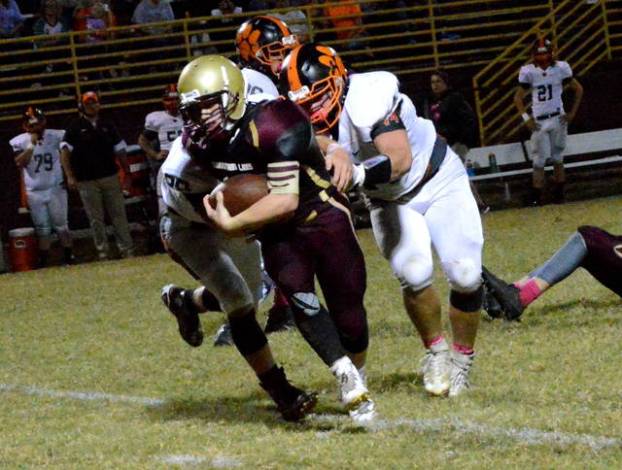 Matt Golden breaks through a tackle during Pineville’s game against Lynn Camp on Oct. 6. On Friday, Golden ran for 36 yards and a touchdown against Williamsburg.

Pineville’s chances of hosting a playoff game came to an end on Friday. The Mountain Lions couldn’t slow down the passing game as the Yellow Jackets walked away with a 49-8 victory.

The victory helps set up a district championship showdown between Lynn Camp and Williamsburg on Friday. Pineville will battle Harlan for third place in the district on Friday.

The Mountain Lions got the running game going after being held to 32 yards the previous week. Lawrence Simpson ran for a team-high 94 yards on 18 carries. Matt Golden scored Pineville’s only touchdown while tallying 36 yards on 13 carries. Sean Whitehead had 29 yards rushing on the night.

The passing game continued to be a problem for the Lions. Garland Ellis completed two passes for 7 yards. Golden completed his only pass for 11 yards. Simpson had three pass attempts but couldn’t grab a completion.

Poore also led the team in rushing with 43 yards on two carries. Ponder had two carries for 17 yards.

It was the Pineville’s passing game that got things started for Williamsburg. Simpson threw an interception to Devonte Powell who returned it 80 yards for a touchdown to give the Jackets a 7-0 lead with 9:02 remaining in the first.

Poore threw his first touchdown of the game with 6:31 remaining in the first. He found White on a 56-yard strike to increase the Williamsburg lead to 14-0.

The Jackets exploded in the second quarter tallying 29 points to grab a 43-0 lead at halftime. A 63-yard touchdown from Ponder to Rose in the third quarter gave Williamsburg a 49-0 lead.

Golden found the end zone for Pineville in the fourth quarter to cut the final deficit to 41-points.

Williamsburg (5-3) will host Lynn Camp (6-2) on Friday for the district championship.

Middlesboro’s tough district schedule continued with a match-up against No. 2 Danville on Friday. The game was never in much... read more