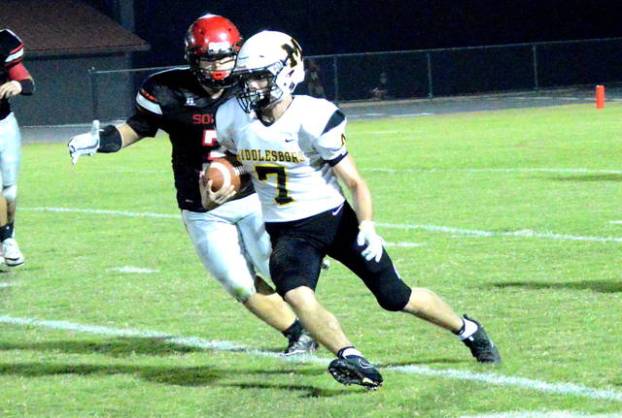 Owen McWilliams keeps the ball during a previous game against South Laurel. On Friday, the senior rushed for a team-high 27 yards and completed one pass for 5 yards during Middlesboro’s 53-0 loss to Danville.

Middlesboro’s tough district schedule continued with a match-up against No. 2 Danville on Friday. The game was never in much doubt after the Admirals exploded to 27 points in the second quarter en route to a 53-0 win over the Yellow Jackets.

The victory for Danville sets up a much anticipated game with No. 4 Lexington Christian for the district championship on Friday. Middlesboro will be battling for third place when they travel to Somerset.

The Jacket offense was stifled by Danville’s defense. They only grabbed two first downs on the night and was held to 81 yards of total offense. They also lost the turnover battle with two lost fumbles and an interception.

Owen McWilliams led Middlesboro offensively with a team-high 27 yards on nine carries. He also completed a pass for 5 yards. Michael Carroll finished with 18 yards on six carries. Anthony Jackson, who was playing in his first game since going down with an injury in the season opener, finished with 7 yards on seven carries.

Danville was about as balanced as a team could be during the game. The Admirals — who played without leading rusher Don Harris — ran for 204 yards and threw for 206 yards. The team was led on the ground by Warren Griffin’s 86 yards. David Walker rushed for 51 yards and a touchdown on four carries.

Danville grabbed a 13-0 lead in the first quarter. VanCleave was the first to score finding the end zone on a 50-yard punt return. The failed kick gave the Admirals a 6-0 lead with 10:22 remaining in the first.

With 2:37 left in the opening quarter, Thornton found VanCleave on a 66-yard strike for the second touchdown of the first. The Nathan Hazlett kick gave Danville a 13-point lead.

The Admirals scored a touchdown in each of the remaining quarters to secure the 53-point victory.

Danville (9-0) will battle Lexington Christian (8-0) on Friday for the district championship.

Stopped in their tracks: Bobcats held to 22 yards rushing in 41-8 loss

The first two drives told the story of game when Bell County hosted Corbin on Friday. During that stint, the... read more