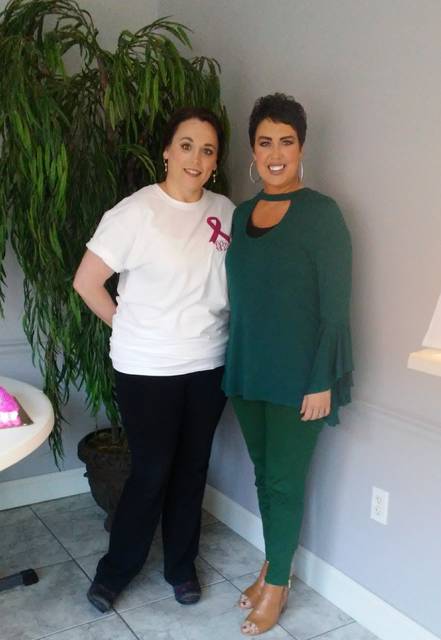 The event was organized by Linda Baird (left), with a motivational speech given by breast cancer survivor Sherry Lindsay (right).

In honor of Breast Cancer Awareness month, Pineville’s Appalachian Massage and Bodywork Therapy hosted its very own event in dedication of the many brave women who have found themselves fighting against the cancer.

Linda Baird, owner of the massage company and organizer of Friday’s event, decided she wanted to find a way to give back to those battling the horrific disease upon realizing just how common the cancer is and the overwhelming impact it has on the lives of so many people.

The event served as both a display of love and support for those struggling with the cancer, as well as a way to educate women on the importance of putting forth their best effort to catch the cancer early on. Local nurse practitioner Lisa Nailer provided those in attendance with information regarding how to do so, as she spoke of the significance of regular breast exams and mammograms.

“I am a firm believer that we perish for the lack of knowledge, which is why I asked Lisa to give a quick informational speech on the subject,” said Baird.

Breast cancer survivor Sherry Lindsay also spoke at the event, sharing her testimony of survival and filling the room with an uplifting boost of encouragement.

“As a recent breast cancer survivor myself, I want to encourage everyone battling this disease to know you are not alone. Our community cares about you. We stand by you and are praying for you,” said Lindsay. “Hold on to hope and never give up the fight.”

Along with the motivational words of Lindsay’s, all cancer survivors in attendance were offered a free 10 minute massage, courtesy of Baird and her business. Light finger foods and cake were also distributed, before concluding the program with a pink balloon release in memorial of all who have fallen from breast cancer.

“I just want to say thank you to all of the businesses that donated; I really appreciate each and every one of you and the time and effort everyone put in to make the event a success,” said Baird.

Baird plans to make the program an annual event each October, and hopes to watch it grow and flourish in the years to come.

“I believe this will become an ongoing tradition in our town to recognize, show support and encourage those who have both overcome breast cancer and those who are battling the disease. I think this event will only grow bigger and better with each year,” said Lindsay. “I’m already excited for next year and I expect an even greater turnout.”

This years Mainstreet Pineville came to a close with a performance by Bell County native musician Joe Coe and his... read more