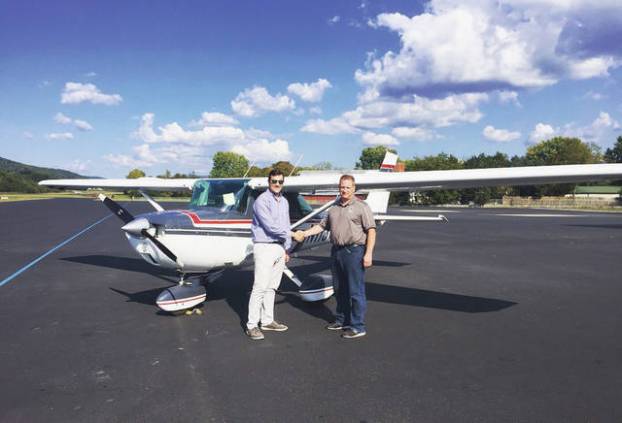 McGlone has been interested in aviation since the age of 5, watching the P-38 (Glacier Girl) get restored.

McGlone started his path in aviation when he attended an aviation school in Lexington in June 2014 where he flew a Cessna 172.

He fell in love with being in the sky and graduated at aviation school with the best teen flight in June 2016.

McGlone was gracious by his family allowing him to start flying lessons by Don Beach, a instructor in Morristown, Tennessee in February.

After long nights of studying and preparing, McGlone was sent off Sept. 23 to Dan Moore in Elizabethan, Tennessee to go for his Private Pilot Check ride . He passed his five-hour oral exam and his two-hour flying portion and received his private pilot’s license that day.

McGlone said he would like to acknowledge and express appreciation to the ones who influenced and encouraged him such as his family, Isaac, his best friend, an international pilot his neighbor (Jeff Albanese) and Dr. Dave Sanford who also is a private pilot.

Furthermore, McGlone is currently Attending Eastern Kentucky University and has plans to become an international pilot.

McGlone is now working towards his instrument rating.

McGlone says, “I can’t wait for the day that I can buy my dream plane, a Cirrus SR-22 and visit the amazing town of Middlesboro, Kentucky.”

When you create your financial and investment strategies for retirement, what will you need to know? In other words, what... read more