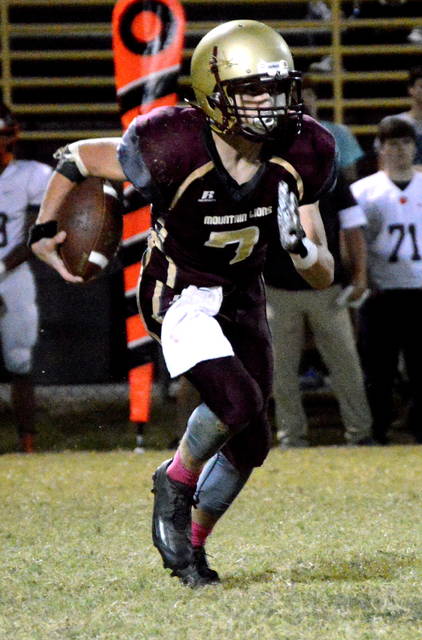 Reese Capps tucks the ball away for a quarterback sneak against Lynn Camp last week. On Friday, Pineville will travel to No. 10 Williamsburg with a potential home playoff game on the line.

Pineville hits the road to battle No. 10 Williamsburg

Pineville continues searching for a way to end their now four-game losing streak after being shutout by district-foe Lynn Camp last week. The Mountain Lions inability to produce offense allowed the Wildcats to control field position for a lopsided victory.

On Friday, Pineville will battle another tough opponent when they travel to Williamsburg to play the No. 10 Yellow Jackets. Last year, Williamsburg escaped with a 26-19 victory following a late touchdown near the end of the game.

The Pineville-Williamsburg series has been one-sided over the course of time. With KHSAA records reaching back to 1998, the two teams have met 19 consecutive times. The Yellow Jackets hold a 16-3 series lead.

The winner of Friday’s game will be in contention to host a playoff game during the postseason. A Pineville loss would secure their place on the outside looking in heading into their regular-season finale against Harlan on Oct 20.

Williamsburg’s tough non-district schedule has given them respect from the AP voters. Despite only boasting a 4-3 record, the Yellow Jackets have lost to teams with a combined record of 18-4 with Paintsville and Ludlow being staples in the top-10 in Class 1A.

Dual-threat quarterback Alec Poore has been the catalyst of the Jacket offense this season. The senior quarterback has tallied 1,828 yards and 23 touchdowns on 52 percent passing. He has tossed 13 interceptions.

Poore’s main target on the season has been Darrell White, who has hauled in 656 yards and 11 touchdowns on 53 receptions. Eli Mattingly has 24 catches for 463 yards and four touchdowns.

Poore also leads the team in rushing with 375 yards and three touchdowns. Kyle Davis and Dalton Ponder are the other pieces of Williamsburg’s rushing tandem. Davis has 355 yards and five touchdowns with Ponder running for 301 yards and one touchdown.

Hunter Brown leads the defense with a team-high 87 tackles. The junior linebacker also leads the team in interceptions with six. Cody Maxey has 57 tackles on the year and a team-high two fumble recoveries.

The bye week for Middlesboro couldn’t have come at a better time. The Jackets had several players injured that needed... read more