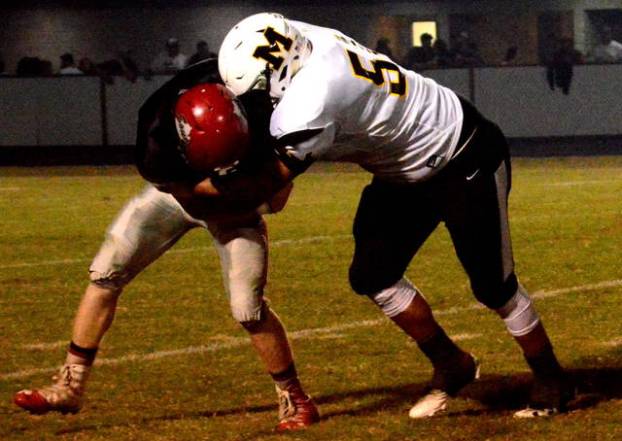 Nick Poindexter gets a sack during Middlesboro’s game against South Laurel. The Yellow Jackets will travel to No. 2 Danville on Friday for its second district game.

The bye week for Middlesboro couldn’t have come at a better time. The Jackets had several players injured that needed time to heal after a rough start to the season. The bye week also gave the team a chance to recuperate from a lopsided defeat to Lexington Christian.

Unfortunately for the Jackets, they are returning to play a team that has proven they are one of the best teams in the state of Kentucky. On Friday, Middlesboro will travel to Danville to battle the No. 2 Admirals in a district clash.

Since 2011, the Danville-Middlesboro series has been one sided. The Admirals hold a 5-1 lead with the Jackets only victory coming in 2013. In the games Danville has won, they have outscored Middlesboro 222-61.

The Jackets will have some extra help this week against the Admirals. While minutes may be limited, quarterback Anthony Jackson and running back Michael Carroll are expected to make a return to the field, according to Middlesboro coach Zach Massengill.

Middlesboro fans have not seen Jackson since he went down with an injury in the season opener against Bell County. The senior quarterback had 98 yards, a rushing touchdown and a passing touchdown before exiting the game.

Carroll had just hit his stride when he went down with an apparent leg injury against South Laurel. The senior back — who leads the team in rushing and was ranked in the top 20 in Class 2A in rushing yards two weeks ago — suited up against Lexington Christian, but he did not see the field.

Danville (8-0) has taken on all comers this season regardless of class. They have played two 6A teams, three 3A teams, one 5A and one 4A team during the non-district portion of their schedule. Those teams include: Frederick Douglass, Knox Central, Boyle County, Pulaski County, Waggener, Garrard County and Tates Creek.

Those opponents have a combined record of 29-20.

The potent offensive attack for Danville is based around a balanced scheme. The team has 1,335 rushing yards and 1,286 yards passing. The orchestrator of the offense is Zach Thornton.

Donlevy Harris and VanCleave lead the ground game for the Admirals. Harris is averaging 85 yards per game while amassing 679 yards rushing with nine touchdowns. VanCleave has 457 yards and six touchdowns on the year. Thornton has five rushing touchdowns.

The Danville defense has allowed 1,286 yards passing and 971 yards rushing. The secondary has been a strong area for the Admirals grabbing 11 interceptions so far this season. Tanner Ford and David Walker have hauled in three picks apiece.

Darrian Bell and Harris leads the team in tackles. Bell has a team-high 60 tackles with Harris ranking second with 43.

Bell County got back in the win column last week with a 20-point victory over Clay County. The rushing attack... read more