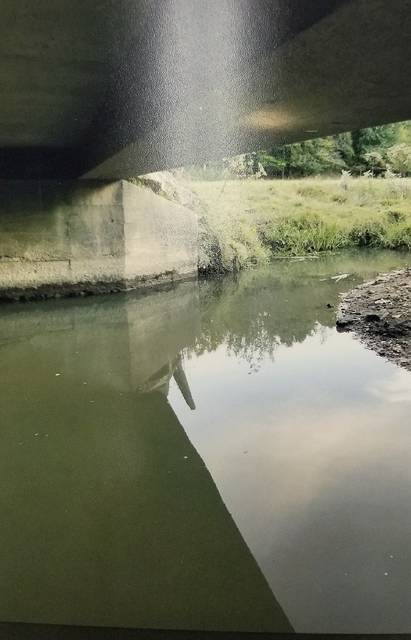 A photo of the underside of the bridge was taken by Doug Hammontry for the council.

Representatives from Frakes and Henderson Settlement were present at the Oct. 10 Fiscal Court meeting in Pineville to express concerns about the safety of a bridge located on Sutty Hollow Road.

Doug Hammontry and Tony McCullough were the first to take the floor and address the court.

They also expressed that they felt recent inspections of the bridge did not adequately address the perceived structural issues of the bridge.

“I do appreciate you guys going out there and being concerned and willing to take those lengths to look at that stuff. You’re protecting your community when you do that. Know that I personally appreciate that. I am acutely aware of the bridge situation…but I want you to know that the bridge is safe,” said Brock.

Brock then went on to explain, from his recollection, that 10 years ago the federal government had changed the mandates in the way bridges are graded as far as weight limited and safety is concerned.

“Over the course of the last three years, the state inspects every single bridge that we have. If those bridges don’t meet inspection then they come to us and tell us the things we need to do to deem them safe,” Brock continued.

It was established that if the federal government comes in for an inspection of a bridge and they find that the current mandates have not been met in any capacity, federal funds can be withheld for the entity and location where the guidelines fall.

“They (the state) take great lengths at making sure they are within those federal guidelines,” Brock said.

A recent study of the bridge revealed that make it safer, layers of blacktop had to be scrapped off to meet new safety mandates.

Documentation dated Oct. 9 and address to Brock from District 11 Bridge Engineer Mike West of the Transportation Cabinet stated that “A reanalysis of the bridge at Sutty Hollow was performed to determine the weight limit with the blacktop removed. The bridge would have a 7-ton weight limit, and could therefore be reopened if the existing blacktop overlay can be removed down to the top of the concrete deck.”

The 7-ton weight limit raised questions with Hammontry and McCullough because school buses and garbage trucks that use the bridge weigh a significant amount more than that.

“The way weight, the formula for weight, is distributed across the length across whatever it is and the number of axles that it has on it. So when they say 7 tons that doesn’t mean that something that weighs over that isn’t safe to go over the bridge…I don’t want anybody to be concerned about their kids crossing that bridge on a school bus because it’s perfectly safe. You folks in the community are totally safe crossing that bridge. We’re aware of the problem…and if there’s any reason whatsoever that we find that it’s become unsafe for the community, we’ll address it,” said Brock.

Maggie Middleton, Youth Ministries Coordinator in Henderson Settlement, also addressed Brock and the court with a letter various members of the Frakes community, including Hammontry and McCullough, had helped prepare.

During her address, the letter reiterated the concerns brought up by Hammontry and McCullough regarding the safety of the community who use the bridge. The lack of guard rails on the bridge was also mentioned.

“We should have a safe bridge…which meets the needs of the people who use it. We can’t help but feel like we don’t matter and if this was a situation in another part of the county — it would have already been replaced years ago. Does a terrible tragedy have to occur before something is done? If so, at whose expense?”

Brock made it a point to counter that last statement by further establishing his understanding and concern.

In celebration of its 19th consecutive year, a new, reinvigorated version of the long-standing Heritage Festival will take place this... read more