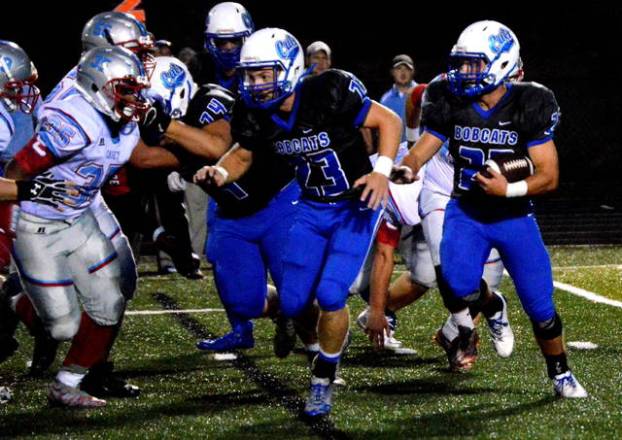 Jordan Wombles follows his blockers during Bell County’s game against Casey County earlier in the year. Bell County will play host to No. 2 Corbin on Friday in a district clash.

Bell County got back in the win column last week with a 20-point victory over Clay County. The rushing attack helped guide the Bobcats to a 41-21 win that improved Bell’s standing in the Class 3A rankings.

On Friday, the Bobcats will square off against their toughest opponent to date. Corbin has been a staple at the top of Class 3A all year ranking in at either No.1 or No. 2 while receiving first place votes each week.

The series between these two teams has been even since 2011 with the Redhounds separating themselves from Bell over the past two seasons. Last year, Corbin defeated the Bobcats by a combined score of 94-8 over the course of two games.

In the regular season, the Redhounds handed Bell a 50-0 defeat. Corbin had a repeat performance in the second round of the playoffs when it routed the Bobcats 44-8.

The Redhounds have had the edge on Bell since 2014 — when a 21-20 overtime victory sparked a five-game winning streak against the Bobcats. Bell County started the series in 2011 with three straight victories.

With a win on Friday, the Bobcats will still have a chance to finish second in the district. A loss will drop the team to third place. If Corbin wins, the Redhounds will square off against Casey County on Oct. 20 for the district championship.

There is a reason why Corbin is known as one of the top teams in Class 3A. The Redhounds are 6-1 on the year after playing a tough non-district schedule. Their only loss came at the hands of Class 1A powerhouse Beechwood. They have earned wins over Whitley County; Alcoa, Tennessee; Pulaski County; Mayfield; McCreary Central and Jackson County.

Corbin enters Friday’s game utilizing a balanced offensive attack. They have rushed for 902 yards and thrown for 1,322 yards.

Cameron Sizemore leads the way behind center. The senior quarterback has thrown for 1,246 yards and 13 touchdowns with only two interceptions. Four receivers have double digit receptions on the year: Cameron Barton, Chase Estep, Christian Gosselin and Cameron Maguet.

Gosselin heads the receiving corps with 293 yards and four touchdowns on 17 receptions. Estep has a team-high 23 catches for 220 yards and one touchdown. Maguet and Barton have 197 and 174 yards, respectively. Maguet has three touchdowns on the year.

The Redhound defense has been on point this year allowing opponents to score in the double digits three times — Alcoa, Beechwood and Mayfield. The team has allowed only 515 yards on the ground this season (73.5 yards per game). They have allowed 820 yards passing.

Grant Gibson and Noah Taylor lead the team in tackles with 47 and 40, respectively. Seven different Redhounds have interceptions on the year with Ethan Sims, Caleb Mitchell and Dylan Massengill returning one for a touchdown.

Gibson has three fumble recoveries on the year with one being returned for a touchdown.

Penalty kicks. It’s something that no soccer coach wants the outcome of the game to depend on. After 90 minutes... read more