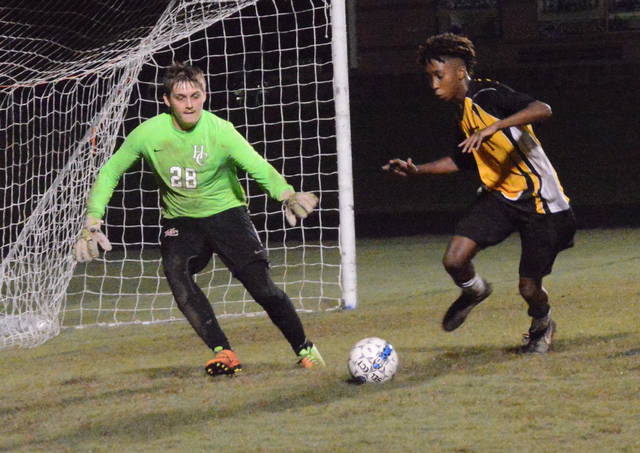 Jabari Kyle dribbles the ball in front of the net during Tuesday’s district tournament game against Harlan County. The sophomore finished the game with one goal. Middlesboro lost to the Black Bears 5-3 after penalty kicks.

Penalty kicks. It’s something that no soccer coach wants the outcome of the game to depend on. After 90 minutes of play, that is exactly what separated Middlesboro and Harlan County from a spot in the 50th District championship and the 13th Region tournament.

While Marcus Kelly has made a name for himself scoring goals for the Black Bears, it was his skills in-goal that helped Harlan County to a 5-3 victory over the Yellow Jackets. Kelly blocked two-of-four penalty kicks with one attempt sailing over the crossbar.

Gerald Foster, Demarco Hopkins and Marcus Kelly each netted penalty kicks for the Bears. Thaisan Sin was the only Jacket to score during penalty kicks with Jabari Kyle and Soreaksmey Sin’s attempts going to the keeper and Junior Arieta’s attempt sailing over the crossbar.

“Even though we worked on (penalty kicks) in practice…I didn’t want that to happen. Unfortunately, it did. We tried to prepare ourselves for it, but it’s just one of those things,” said Middlesboro coach Tim Millett. “We had our chances. It just wasn’t meant to be.

“The kids played extremely hard. The kids gave it everything they had. We had so many chances down the stretch of the ball game there. In the two five-minute overtime periods, we kept the ball on their end of the field. Unfortunately, we couldn’t get the ball in the net.”

Harlan County heads to the 50th District title game against Knox Central while Middlesboro’s season — one in which the Jackets defeated the Bears twice — has come to an end.

“Unfortunately (in) these games, somebody’s got to win and somebody’s doesn’t win,” said Millett. “You’ve got to give Harlan County credit. They battled and battled. We just came up on the short end.”

Middlesboro used an aggressive style of play to keep the ball on Harlan County’s side of the field for the majority of the first period. With the Jackets’ back line up near midfield, the Black Bears found trouble breaking away without being called for offsides.

“We’ve worked on that. Coach (Kelly) Hiersche has done a great job with the defense and goalie this year. She’s done a great job, her and coach Butler,” said Millett. “We tried to get the defense up…because it takes away offensive opportunities for the other team. We kept it on their side of the field. We were in attack mode.”

Kyle broke a scoreless game at the 30-minute mark of the first period. Thaisan Sin found the sophomore on a cross with Kyle putting the ball in the net to give Middlesboro a 1-0 lead.

The Jackets had several other chances beyond the midway point to score goals with a Tyrese Simpson shot going straight to the keeper and another going just over the crossbar.

Harlan County’s best chance of scoring in the first half came on a breakaway with 14:50 remaining in the half. The attempt was broken up by Joey Napier. The score remained 1-0 heading into halftime.

It didn’t take the Bears long to tie the game early in the second period. At the 38th-minute, Kelly found the back of the net to tie the game at 1-1. He followed his first goal up with a second in the 23rd-minute after shooting the ball through three defenders to give Harlan County a 2-1 lead.

Kelly temporarily exited the game shortly after his second goal because of cramps. Middlesboro took advantage with Thaisan Sin finding Soreaksmey Sin on a cross for a goal in the 22nd-minute. The goal tied the game at 2-2.

The score held up for the remainder of the second half to take the game into overtime. There were few attempts in the first overtime for both teams. The second overtime ended with a TJ Patterson goal that was waved off for a hand-ball, forcing the penalty kicks.

Harlan County outshot the Jackets 3-1 to secure the victory.

Middlesboro entered the season with a lot of underclassmen in pivotal roles. Several of those players had never played soccer before this season.

“We had a lot of first-year players this year that never played the game of soccer. I’m looking forward to having them in the future,” said Millett. “We had a good year. From my coaching perspective, I thought we improved tremendously as the year went on. From a coaching standpoint, that’s what you want.”