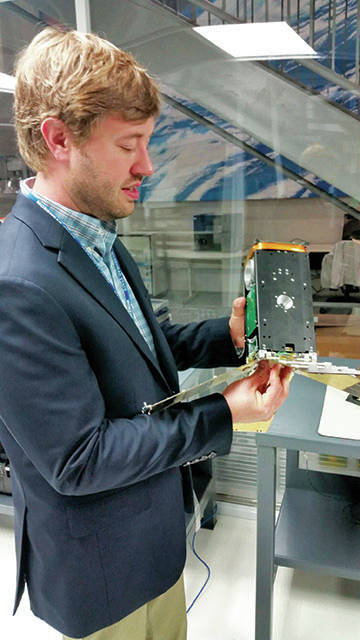 Jared Arnett, executive director of SOAR, holds a component to a satellite during a visit to Morehead State University’s Space Science Center.

Arnett spoke of SOAR’s work to build a 21st Century Appalachia Kentucky and the important role communities and stakeholders are playing to build a connected economy across the region.

“When I am asked to describe what SOAR is, I describe it as an attitude,” said Arnett. “When they say we can’t, we tell people they can, and then we help them do it.”

Arnett talked about SOAR’s evolution into a Collective impact organization. A Collective Impact model is an innovative and structured approach to fostering collaboration across many sectors, including, government, business, non-profit organizations and citizens to achieve significant and lasting change.

“This starts with a plan, and we have developed a Reginal Blueprint to create a 21st Century Appalachia,” added Arnett. “The plan was created by working groups and the input of over 3,000 citizens.”

• Increase the availability of affordable, high-speed broadband, through fiber, to businesses and residents; and increase adoption rates throughout the SOAR region;

• Develop our regional workforce to be competitive in the digital economy and emerging industries;

• To create more and expand existing small businesses within the region by taking full advantage of the digital economy;

• To reduce the physical and economic impact of obesity, diabetes and substance abuse;

• Increase the amount of industrial employment, which includes manufacturing, natural resources, processing, and distribution by expanding existing companies and attracting new ones;

• Create a local foods movement by connecting local producers to markets for their product both within and outside the region; and

“It’s amazing to see the collaboration taking place in Morehead with city officials, the university and the business community,” said Arnett. “Aerospace has a substantial footprint in Kentucky’s economy, and we are working with our partners to bring more of that footprint to our part of the state.”

Arnett toured one of those companies, Rajant Corporation, during his visit.

Morehead State University’s Space Science Center is a world leader in nanosatellite and cubesat technologies that are being used by organizations such as NASA, the U.S. Department of Defense, other universities and aerospace companies around the globe.

“Morehead State is a leader in Aerospace, and its approach to Space Science and education is leading the way for new investments in our region,” said Arnett. “I believe we are on the cusp of something great.”