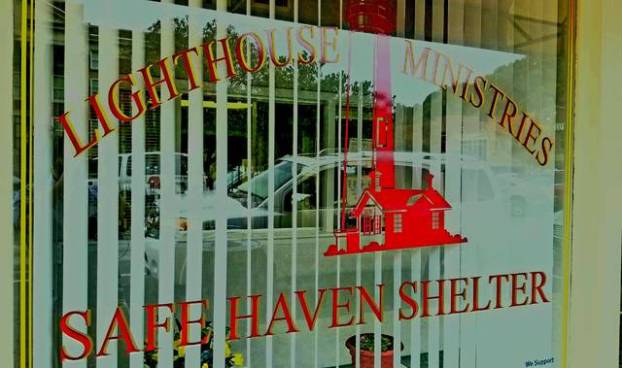 The storefront of the Lighthouse Ministries Safe Haven Shelter in Downtown Pineville.

During the Oct. 9 Pineville City Council meeting, the issue of the Lighthouse Ministries Safe Haveen Shelter was yet again raised by the council.

Since last reported on, the owner of the shelter, Darrel Lowe of Lighthouse Ministries, has sought to sell the shelter to any interested party to help assuage the issues that have remained present in Pineville due to the influx of homeless.

Mayor Scott Madon continues to receive calls to his office reporting on unsavory activity of the homeless present in the city.

Madon and the council expressed that they know the problem is not just relegated to the shelter, but they do feel that removing the shelter from the downtown area would help to stymie many of the issues present.

Issues raised were instances of loitering around businesses, sleeping under bushes, resting on the lawn of the courthouse, inundating the public library and residences allegedly seeing drug deals out in public.

“We’ve got to start doing something…there’s more and more coming. when you see them carrying suitcases, you know where they are coming from,” stated councilman Tuck Woolum.

One of the problems the council recognizes is that the policy of the homeless shelter is that they are allowed to stay there for 30 days, but when those 30 days are up, they simply don’t leave the city proper.

One of the policies of the shelter is that a person can be admitted if they do not have any violent crimes on their record. The point raised by the council is that drug related offensives aren’t violent crimes, and a massive problem in the city is the presence of drugs.

“I had one daddy tell me that he would not allow his son to go into the library anymore,” said Woolum regarding how severe the problem has become for certain public spaces.

Madon theorized that he felt that although the library has never lodged a formal complaint, they would like to do something about the situation but has not as of yet due to the library being a public service.

The biggest take away from the discussion is that the system is simply not strong enough to aide the homeless that come in and get them moving on their way. According to Lowe, the shelter has garnered a “5-star” reputation among the homeless populace, which inevitably brings an influx of individuals the shelter and the town cannot accommodate.

“The mistake on the Homeless Shelter was when they sold it because it is in a business district and they are running a multi-family dwelling down there, which is totally against city ordinance. Now, if we want to be the bad guys and we want to enforce that I guess we go to court to see where it falls…that was one of the mistakes they should have never let happen — having a homeless shelter in a business district,” said Madon.

The silver lining of the situation is that Lowe has informed the mayor’s office that there is a prospective buyer for the shelter, so until everything falls into place, Madon has stated that a more prominent police presence and stricter enforcement on various ordinances will have to make do.

Man jailed for trying to procure a minor