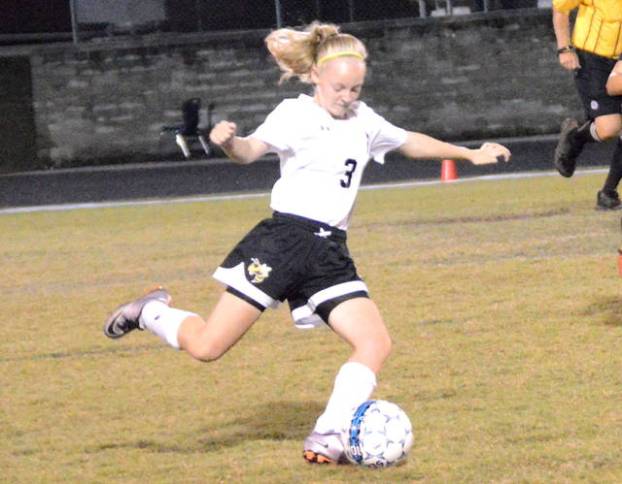 Tiffany Thomas crosses the ball during Middlesboro’s district tournament game against Knox Central on Monday. The Lady Jackets fell to the Lady Panthers 2-0 and were eliminated from the tournament.

Knox Central chose the right time to pick up their first victory over Middlesboro in program history. The Lady Panthers — whose program began in 2014, according to KHSAA — used two early goals to secure the 2-0 victory over the Lady Jackets.

Knox Central started off aggressive with lots of pressure offensively. Middlesboro couldn’t respond to the pace allowing the Lady Panthers to control possession for the majority of the first half.

“I told our girls on the bus don’t come down here and think you can just show up because they are better. (Jason Jacobs) knows what he’s doing,” said Middlesboro coach Quinton Mason. “They are a better team than they were a month ago when we played them. We just didn’t come out with enough intensity the first half.

“One of their goals, our girl scored for them. That stuff happens. I don’t blame her. The other goal went right through my keepers legs. We just didn’t come out with enough want to. Everybody’s been on fall break for a week and no practicing. That hurts us.”

The Lady Panthers had several opportunities early in the game tallying four corner kicks in the first 10 minutes of play. At the 11:52 mark in the first half, Knox Central found the back of the net to give them a 1-0 lead.

Emma Callihan followed that goal up with one of her own at the 14:47 mark in the first to give the Lady Panthers a 2-goal lead.

Middlesboro’s best chance to score came with less than 10 minutes to play in the first. The Lady Jackets had four consecutive corner kicks, but couldn’t come away with a clean shot on goal.

Four minutes into the second half, Baylee Woody was able to work her way inside the box. The junior couldn’t get a clean look at the goal and never got the shot off. It was Middlesboro’s last real shot at scoring a goal in the game.

With the loss, the Lady Jackets’ season comes to an end while Knox Central advances to the 50th District championship against Harlan County and earned a spot in the 13th Region tournament.

“I’m proud of them. We played with 13 or 14 players all year. That’s iron man soccer,” said Mason. “We had chances. We didn’t get blown out every game. They had their chances. They’ll come back next year, and we’ll fight just as hard if not harder.”