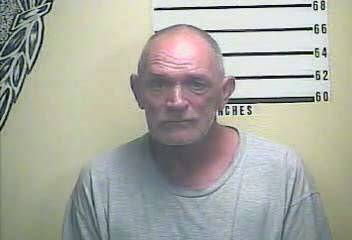 Thomas Johnson, 62, was charged with kidnapping of an adult, first-degree fleeing or evading police on foot, second-degree escape, resisting arrest, menacing and second-degree wanton endangerment of a police officer.

According to the citation, the arrest was due to a warrant Perry issued against Johnson for allegedly restraining a woman with intent to inflict bodily injury or terrorize the victim.

The citation states that Perry took Johnson to the Bell County Detention Center after he was arrested, read his rights, and a brief interview was conducted. Johnson was not handcuffed at the detention center due to him being compliant up to that point.

The citation continues to say that Perry and Johnson were in the sally port of the detention center when Perry looked into the booking area briefly only to turn back and see Johnson fleeing. Johnson allegedly ignored Perry’s commands to stop. Perry got close enough to Johnson to deploy his taser. Neither the first nor second cartridge of the weapon was effective in stopping Johnson. Perry continued pursuit but got tangled in the lines of his taser, losing Johnson. It was at this time Pineville Police Department Officer Jason Taylor and KSP Trooper George Howard aided Perry in the chase. The two were able to apprehend Johnson.

According to a press release from the Bell County Sheriff’s Office, after an investigation by sheriff’s Sgt. Jared Smith, deputies Patrick Books and Justin Patterson served a warrant on Nunley at his residence stemming from an incident reported on June 29.

The warrant states that Nunley attempted to engage in deviate sexual intercourse with another person aged 13.

Nunley was arrested lodged in the Bell County Detention Center charged with second-degree criminal attempt to commit sodomy. Nunley is being held on a $100,000 cash bond.

According to the citation, Messer was at an approved checkpoint located at the junction of KY 66 and Simms Fork Road, when Asher approached. As she approached, she crossed the center line and swerved back into her lane. Upon approaching the road check she was not wearing a seat belt.

The citation noted that Asher seemed anxious and nervous while being spoken to. She was pulled over to the side of the road for further questioning. Standard sobriety tests were conducted but no clues were observed. Asher stated she was just really nervous. She then consented, but with verbal and written consent, to a search of the vehicle, stating it was not hers but her boyfriend’s. She was informed that cooperation was in her best interest. She then handed Messer a film container stating it contained Xanax and Klonopin. Inside the container were 25 green, round pills marked “M” and one side and “C/14” on the other. Inside the container were also 33 peach colored oval pills. Inside the trunk of the vehicle was a black and blue gym bag with two cell phones, a small black bag and Brinks lock located inside. Asher stated the bag was her boyfriend’s and she did not know what was inside of it. Inside the bag two bundles wrapped in paper towels with rubber band around them were found. Messer unwrapped the paper towels and located two clear plastic baggies with a clear rocky substance inside believed to be methamphetamine. Each bag weighed approximately 30 grams.